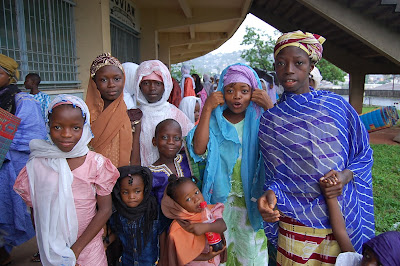 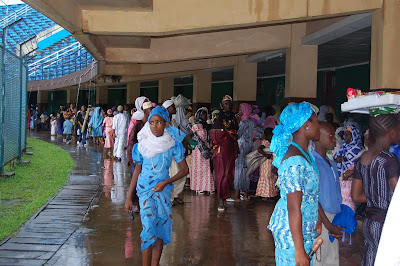 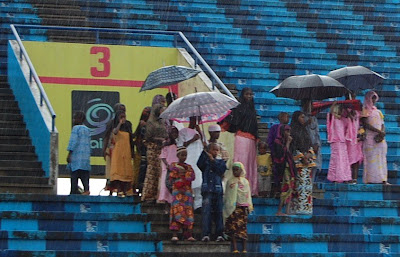 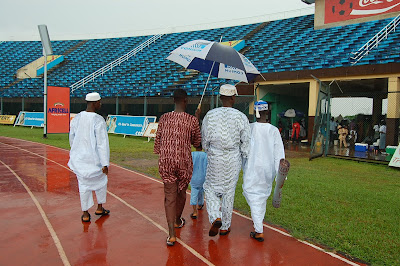 Today 1st October 2008 marks the end of the month long of fasting and prayers. All over Sierra Leone our Muslims brothers and sisters making it a point of duty to fulfill the request made by the chief Imam of the huge central Mosque on Television last night.

Here in Freetown, we were greeted by heavy showers since morning but this could not stop people from making this special prayer day.

Devoted Muslims, men and women, boys and girls rushed in, in small numbers with their umbrellas or cloth on heads to receive this blessing.

As usual more beggars on the streets and gates hoping to receive something, seeing it as a big pay day for them to receive alms from people. I obliged them with a little money.

Else where in Kabala I spoke to a friend and he said it was done well and that the weather was great there. All kids at Nazareth House Apostolate School in Kabala were given a break, too, today to observe this special day of prayers.

I was there in Freetown, to see it all here and to join my brothers and sisters celebrate. See pictures above.

NOTE: Eid ul-Fitr or Id-ul-Fitr (Arabic: عيد الفطر ‘Īdu l-Fiṭr), often abbreviated to Eid, is a Muslim holiday that marks the end of Ramadan, the Islamic holy month of fasting. Eid is an Arabic word meaning "festivity", while Fiṭr means "to break the fast" (and can also mean "nature", from the word "fitrah"); and so the holiday symbolizes the breaking of the fasting period. It is celebrated starting on the first day of the Islamic month of Shawwal.

Muslims are commanded by the Qur'an to complete their fast on the last day of Ramadan. Because the day depends on the sighting of the moon or scientific calculations of the lunar calendar, the exact date (in the Gregorian calendar) varies from country to country, however, Eid-ul-Fitr is always celebrated on the first day of the Islamic lunar month of Shawwal.

Common greetings during this holiday are the Arabic greeting ‘Īd mubārak ("Blessed Eid") or ‘Īd sa‘īd ("Happy Eid"). In addition, many countries have their own greetings based on local language and traditions.

Typically, Muslims wake up early in the morning and have a small breakfast (as a sign of not being on a fast on that day) of preferably the date fruit, before attending a special Eid prayer (salah) that is performed in congregation at mosques or open areas like fields, squares etc. Muslims are encouraged to dress in their best clothes (new if possible) to attend the Eid prayer. No adhan or iqama is to be pronounced for this Eid prayer, and it consists of only two raka'ahs. The Eid prayer is followed by the khutbah (sermon) and then a supplication (dua') asking for forgiveness, mercy and help for Muslims across the world. The khutbah also instructs Muslims as to the performance of rituals of Eid, such as the zakat.[1] It is then customary to embrace the persons sitting on either side of oneself, whilst greeting them. After the prayers, people also visit their relatives, friends and acquaintances[2] and some people also pay visits to the graveyards (ziyarat al-qubur).[2] (Reference from Wikipedia, Eid/Ramadan)
Posted by Vicki at 10:26 AM