You can view the photos that James took of Mohamed, the man living in the bridge through this photo web album:
http://picasaweb.google.com/nha.prayer/TheBridgemanFamily
( you may have to cut and paste it to web browser). As with all of our photo albums through Nazareth House to get the full effect it is best to view the pictures with the slide show option.
Posted by Vicki at 4:31 PM 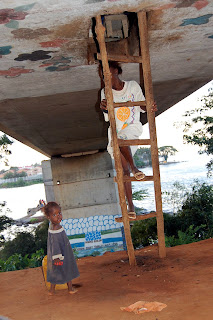 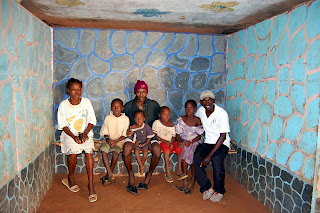 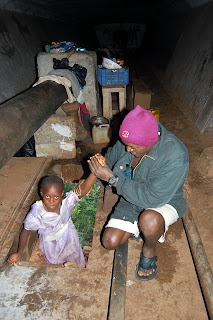 The Freetown Bridgeman and His Family

The following is a writing by James Mansaray of Nazareth House Apostolate, St. Laurence House, Sierra Leone. After reading an article, I asked James to find this bridgeman and this is his report from that meeting.

Having searched for a single room for twelve good months with no answer, Mohamed Bangura now called THE BRIDGEMAN makes use of the nearest, cheapest but dangerous dwelling place under the biggest Bridge in Sierra Leone's Capital, Freetown with his newly wedded wife Gladice.

It is commonly said in Freetown that jobs are much easier to find than a sleeping place. This is true from my own point of view since the Freetown population is increasing day by day. Having settled in this Capital since 1993, i always see and hear people being kicked out of houses for one reason or the other. One of the primary reasons for this is that not all can meet the dollar or Pound sterling demand from wicked landlords and landladies. The end product of this is nothing but people sleeping outdoors or making the best use of streets, bridges, market tables, government buildings to name but a few. It is customary in Freetown to see a family of six sleeping in one single bedroom including mom and dad. Tell me this is not true.

This drives me back to Mohamed Bangura's story that has made the Abardeen Ferry Bridge as his permanent dwelling place. I had never known that there was a whole beloved family under that bridge till i visited them yesterday. My question is how many people are aware of this? Who really cares? Should this be the life time abode for this family? My regards to Nazareth House Apostolate that have encouraged me to search in the cracks and to be with the poorest of the poor to see all that is happening and there I find friends in need.

Mohamed Bangura unavoidably adopted his Bridgeman title since 1995 when he first discovered a sleeping place under this bridge. His wife Gladice was pregnant at the time. With no job and money to find a better place, they ended up having their first daughter Adama in this outdoor premise. There was absolutely nothing they could do but make use of what they had at hand. To Gladice, this was senseless and scary but as an African woman, you strictly adhere to your husband's rules and regulations. Besides, love sees no pain nor hears any complaints, less talking about where to sleep and what to eat here in Sierra Leone.

With nothing to do with his mason skills, Mohamed embarked on painting to beautify his surroundings and newly found home. One of his first paintings was that of Jesus Christ and the Prophet Mohammad. Having no equipments for his drawings at the time, he uses charcoal and locally made pan lamp to design his stuffs. He drew a cross symbolising Christ and a walking stick with several round hands symbolising the Prophet Mohammed.

This particular painting of the two great prophets baffled me but after he had explained it well to me i ended up understanding his story. Indeed he has a great talent and respect for the two prophets. He did not only draw this for the sake of art but uses it as his sign of protection and guidance in his new home.

Mohamed did encounter terrible nightmare and deadly attacks in his early stay under this bridge not talking about dozens of cobras and scary rodents he has killed to protect his environ. He was also faced with several police harassments and questioning but he has no way out but to tell them his story and why he has chose this area as his dwelling place.

As the war drew nearer to Freetown in the earlier 2000, this bridge home became more useful for Mohamed for he sees it as his own Bunker where he will hide from bombs and bullets. When questioned about his most frightening moment under the bridge, Mohamed said he will never forget seeing three huge and round bombs placed on the side of the bridge during the June 2nd 2002 invasion of Freetown. A group of military personnel afraid that these bombs might explode in their barracks place it under the bridge not knowing that there was a family seeking refuge there. He fearing that this means trouble for him and his family seek help and complain at the Murray Town military barracks which is just close by and the bombs were removed from his surroundings. For him that was his most scary moment not mentioning about continuous bomb sounds and antiaircraft shelling from the Lungi axis into the water near this bridge.

Today, Mohamed feels much safer having spent 12 odd years in this dark place, he is now proud to boast of four kids being born under this Bridge. When asked if he feels comfortable with this situation, he said he has no option and his kids had been forced to that situation. The kids are growing up under this difficult condition with only two in school. He just can't send them all to school at the same time. When asked what his greatest needs are, he said food, medicine, school fees, and clothing for his kids and battery for his flash light. He even uses flash lights during day time.

I took the courage to spend some time with him in his cave to look at his paintings and way of life in there. I ended up with a severe head ache during my short time there. It is extremely pathetic for those beautiful kids to live in that terrible condition. Climbing that wooden ladder all day long and sleeping in that hole is just not good for this poor family. They need help and attention. This has forced him to fish and sell stone and sand taken from the ocean nearby to provide for his family.

I will be seeing them from time to time. It is important that Nazareth House be supported in prayer and financially in order to give outward gifts of love to our brothers and sisters in need. This is the importance of a permanent center in Freetown for Nazareth House to work from. Without it we are only a temporary existence and we may fade away. There will be many left, stuck in the cracks if we disappear.

With donations sent from you I can purchase food, batteries, for this family and many others. Used clothing, I can also gather up from time to time from here in Freetown (do not send clothing from the States it is easier & cheaper to purchase it here than to pay the cost of posting it). This aid is the fruit of the prayer of Nazareth House Apostolate, living the life of Nazareth, hidden, in prayer, loving all in His Name. 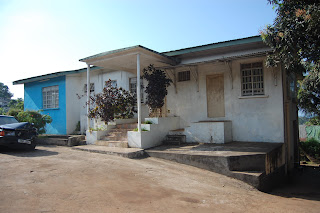 The Man living in the Bridge

I found an article from the BBC about a man who lived in the Aberdeen Bridge in Freetown during the Rebel war. He has moved his family in and remained there ever since. He paints the walls and fixes the place up as a normal home. After reading the article and seeing the pictures, I asked James to go find him. He and Johnny went there this afternoon and met the man. James promises a full report tomorrow and I will share it with you. To read the BBC articles & photos visit this link: http://news.bbc.co.uk/2/shared/spl/hi/picture_gallery/07/africa_sierra_leone_bridge_house/html/9.stm

In other news today in Freetown, as I mentioned before, it has become vitally important for us to secure another compound for Nazareth House to work out of in Freetown. We can no longer continue to rent, we must own in order to be free of the expense of renting a place we cannot own. We have no security, the landlord can ask you to leave and you have no choice. Our rental agreement at the currrent St. Laurence House ends March 2008. We must have a center to work out of, distribute medication and needs, and to house overseas quests who we bring to experience the Nazareth life and work in Sierra Leone.

James has been actively searching and investigating property in Freetown. He sent pictures of a piece of property that needs lots of work, needs all new plumbing, roof leaks, wall around compound is falling apart, ...you name it and it is in need of repair. A front view of the house is above upper right. Anyway, they didn't give an asking price until today after having James wait for an appointment. Shockingly they are asking 85,000 Britsh pounds which is equivilent to $174,233 dollars! The repairs alone on this house could cost up to $80,000! It has 5 bedrooms, couple of inadequate bathrooms, storage room. Can you imagine? So this is what we are up against...insane asking prices, inadequate facilities... please pray as we search for a home in Freetown for Nazareth House... Pray for James as he investigates all this...pray for open doors.
Posted by Vicki at 4:06 PM

Email ThisBlogThis!Share to TwitterShare to FacebookShare to Pinterest
Glad to have you join us on our "blog" for Nazareth House. Today, I've learned from James in Freetown, that his brother and his wife, Paul and Hannah have a new son! They already have a son, Samuel who is pushing 3 years old. No word on the newest addition's name yet, but Paul has sent an email requesting Fr. Seraphim to Baptize the child on our next visit. We plan that visit in March 2008.

All is well with everyone at St. Laurence House, Roo is learning to eat but still prefers baby food to the rice, etc that the rest of the family eats. We'll have to work on him about this. The girls, Lucy & Ann Marie, are studying hard in school. School fees for them have increased now that they are in Middle School, so we need to consider this in our provision allowance for them.

James has been actively searching for property for the continuation of our work in Sierra Leone. The rental agreement at our current location ends in March, 2008.

Our school in Kabala is coming along very well and the roof will be put on soon.
Posted by Vicki at 1:03 PM

Greetings from Nazareth House Apostolate Blog site! We've created it in order to keep an open line of communication concerning the updates and works of Nazareth, in Sierra Leone and at home in the States.
Posted by Vicki at 6:11 AM