We have a prayer path at St. Simeon Skete. 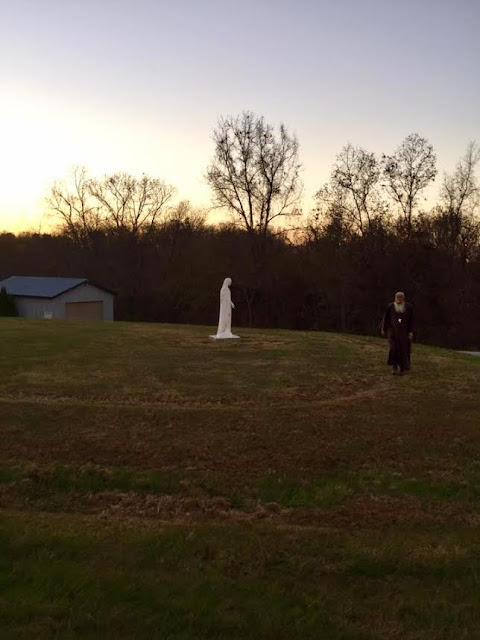 We also had one when we were in Louisville and it was very much a part of our prayer life. 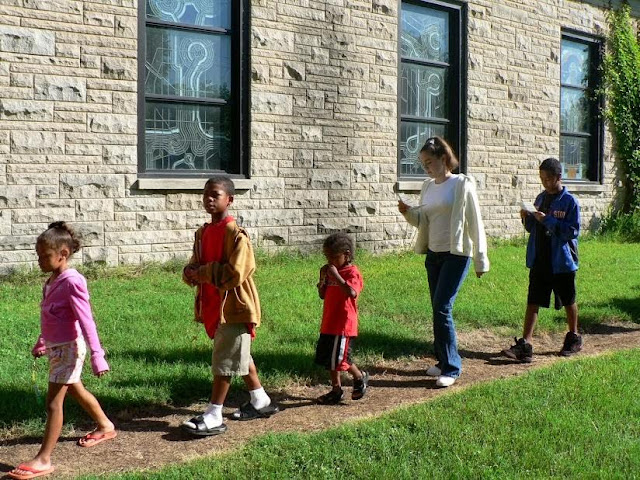 There were a lot of struggles and battles waged at that former path in Louisville, yet it was the biggest source of comfort to a lot of us.   Walking onto that Sacred Space felt secure, like climbing up onto the lap of Jesus and taking a big sigh of relief.  You could breathe easy there.  It has been the one thing we have missed since we moved to the skete.
Later we were excited to find out that John Bradburne the Franciscan, martyred during the war in Zimbabwe,  also had a prayer walk he called the Prayer Track up on top of Chigona Mount.

Saying the rosary while walking engages all the senses, the movement, the sights and sounds around you, verbalizing the clauses out loud, breathing the air - it all helps to deepen your prayer, and in the case of the Rosary it deepens the Life of Jesus within you. 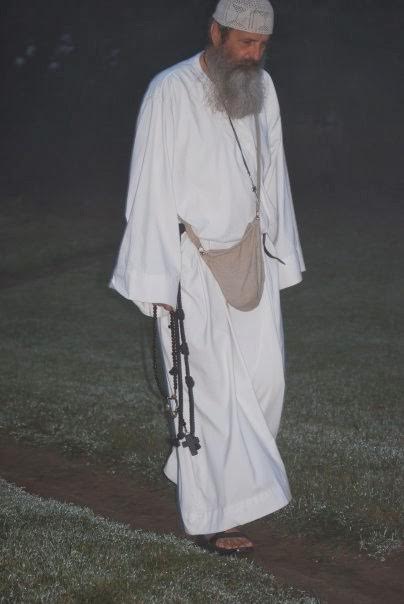 But whereas in Louisville the sounds of the city were a palatable hum, here in the rural area they are different - and much to our surprise - much more distracting.  Each sound is sharp amplification, like a cracking whip amongst the stillness. We are walking the prayer path amongst the loud trucks that zing past the skete, we are walking amidst the sporadic gunfire of the hunters and/or the constant string of gunfire from the neighbors' several personal firing ranges.  Sometimes it sounds like a war zone.  And then during the week, while their owners are at work - its the dogs.  One set of dogs begins to bark which entices another set and the barking rolls on and on.  At times, this place is the loudest place we've ever been. 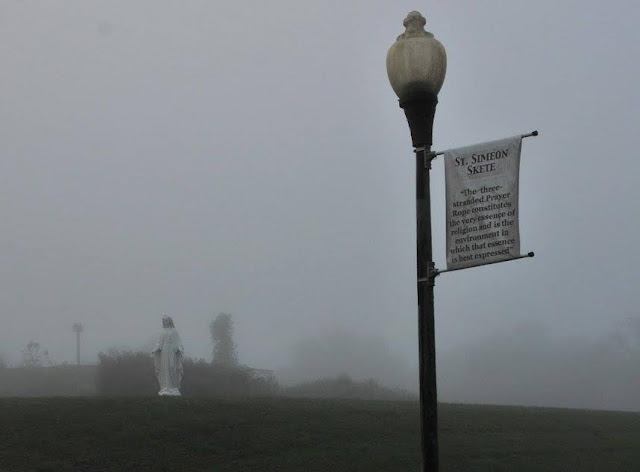 But - the prayer continues as we dig deeper into it, and continue to walk the path.   The statue of Mary is situated in such a way here at the Skete Prayer Path so that her gaze is not on us, it tenderly looks steadily and intently at the path - the only way you can be in her gaze is if you kneel.  In this way,  she is reminding us to continue in the path of her Son's life (The Rosary) all the while she is with us, in union with us in that prayer. "Stay on the path that the LORD your God has commanded you to follow. Then you will live long and prosperous lives in the land you are about to enter and occupy." -NLT Deut. 5:33 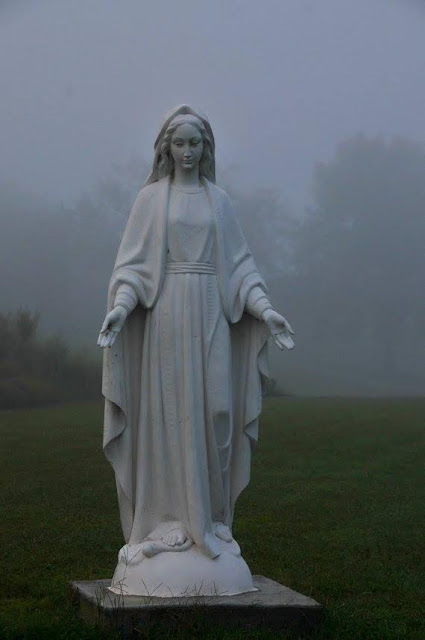 I don't know what kind of "gunfire", "yapping dogs", or "road noises" are out there trying to distract you from your focus on God today. But I do know that they are out there and they want to distract you.  I also know that Jesus is bigger than any of our struggles, any of our pain and that his Mother is with us, gently nodding for us to stay on the path.  "But as for you, be strong and don't get discouraged, for your work will be rewarded." -2nd Chronicles 15:7    And while you are out there deflecting distractions, know that we are here doing the same all the while keeping each other in prayer.  You us and we you.  God bless you.

And besides.... "the dogs bark, but the caravan moves on". 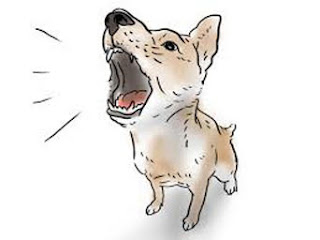 And so this is Advent

The Gospel for 1st Sunday of Advent
St. Matthew xxi. 1.

WHEN they drew nigh unto Jerusalem, and were come to Bethphage, unto the mount of Olives, then sent Jesus two disciples, saying unto them, Go into the village over against you, and straightway ye shall find an ass tied, and a colt with her: loose them, and bring them unto me. And if any man say ought unto you, ye shall say, The Lord hath need of them; and straightway he will send them. All this was done, that it might be fulfilled which was spoken by the prophet, saying, Tell ye the daughter of Sion, Behold, thy King cometh unto thee, meek, and sitting upon an ass, and a colt the foal of an ass. And the disciples went, and did as Jesus commanded them, and brought the ass, and the colt, and put on them their clothes, and they set him thereon. And a very great multitude spread their garments in the way; others cut down branches from the trees, and strawed them in the way. And the multitudes that went before, and that followed, cried, saying, Hosanna to the son of David: Blessed is he that cometh in the name 'of the Lord; Hosanna in the highest. And when he was come into Jerusalem, all the city was moved, saying, Who is this? And the multitude said, This is Jesus the prophet of Nazareth of Galilee. And Jesus went into the temple of God, and cast out all them that sold and bought in the temple, and overthrew the tables of the money-changers, and the seats of them that sold doves, and said unto them, It is written, My house shall be called the house of prayer; but ye have made it a den of thieves.

Jesus tells His disciples to go into the city  AND He tells them to find a tethered colt that no one had ridden.

Think about that image:  "a tethered colt which no one has ridden..."

Of course the people are waiting for a dominative, powerful, substantive image - a King, A Ruler who is going to change everything from the outside (the surface).

But Jesus says "I'm not going to come in on a horse, in triumph but ...as Zechariah 9:9 prophesied... I'm coming in on a donkey to redefine what power is, worth is, strength is, trust is... 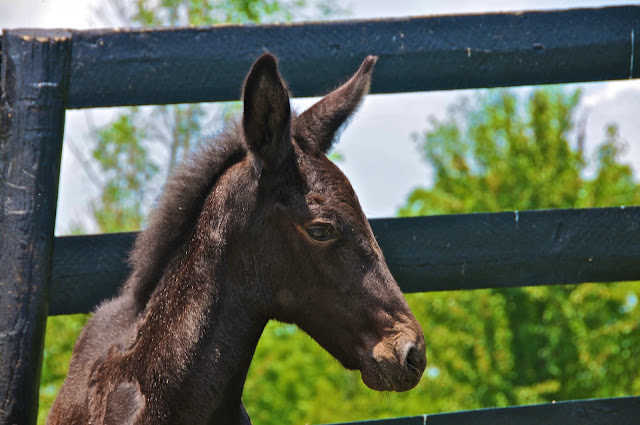 This colt/donkey, THIS powerless image is a tethered colt, its been tied up in all of history.  No one's ever wanted to use it, no one's ridden this kind before but Jesus is going to ride it into the city to show the world a different way, a new way, the way of trust, the way of vulnerability, the way of powerlessness. 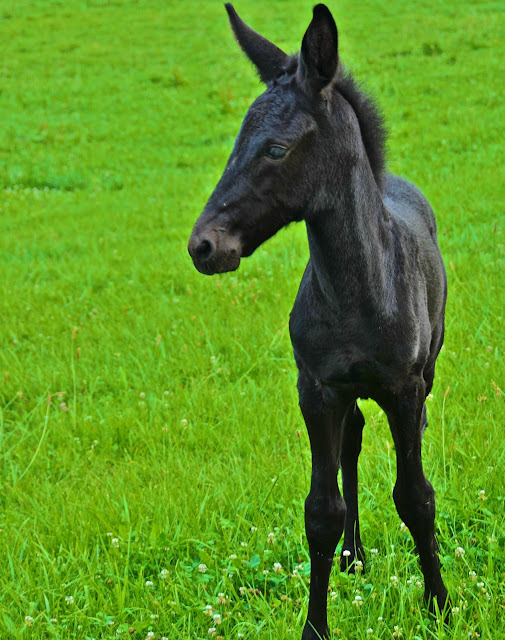 As Jesus rides into the city in this "different way" the people wonder "Who is this?"  "What is this new way?"  Jesus upsets the system and says: "its prayer".

Of all the battles that God has with human consciousness, the battle to get rid of those things (furniture) that keep us from making our souls a house of prayer must be God's most difficult battle.   Culture wants to rearrange the "furniture" by dominative power - the ability to influence others through coercion, hiring and firing, punishing, threatening, lawsuits, money, position.  This will rearrange the "furniture" and most will respond to it.  But at best, this is all we can do: re-arrange the "furniture".   But Jesus doesn't re-arrange the furniture, He pitches it - throws it out - opting for a House of Prayer!  Anything in your life that is keeping you from prayer needs to be pitched!

As the Holiday Season approaches many will be re-arranging their living rooms to prepare for Holiday guests or give a new look but only PRAYER can change the living room into a LIVING room.

ALMIGHTY God, give us grace that we may cast away the works of darkness, and put upon us the armour of light, now in the time of this mortal life, in which thy Son Jesus Christ came to visit us in great humility; that in the last day, when he shall come again in his glorious majesty to judge both the quick and the dead, we may rise to the life immortal, through him who liveth and reigneth with thee and the Holy Spirit, now and ever. Amen.