Seventeen Days of the Name

Seventeen Days of The Name

The Seventeen Days of The Name begins with the Feast of St. Mary Magdalene (July 22) who was the first to witness the Resurrection.  From here we proceed to the Feast of the Seven Sleepers of Ephesus (July 27)*, these six days compose “The Pilgrimage of the Seven Sleepers” where we pray the Seven Redemptive Names of God.  Eleven days further delivers us into the second day of “The Rosary Novena for Peace” (August 6 -14).  These first two days that the seventeen brings us to are feasts that give us the eighth and ninth Names of God, i.e., August 6, The Feast of the Transfiguration giving us the all encompassing Name, “I AM” and August 7th, the Feast of the Holy Name of Jesus, the Incarnate Salvific ninth Name of God.

Just as the Seven Sleepers waited to be awakened (resurrected) into a new world and life, so the Seven Redemptive Names of God lie in the cave of our hearts (Mt. 6:6) waiting to be resurrected into our lives, our decisions, our responses and directions we take.
The Seventeen Days of the Name as with the Seven Sleepers is the work of representing eternity in time and perceiving in time eternity. For this work to be realized in our lives we must survive the impact of the world upon our resurrection which is everyday present.  Here the Cave has a distinct role in religion and society via initiation through withdrawal (Mt. 6:6) into an environment of internal isolation with God alone as a rite of seclusion as well as resurrection.  Therefore, due to this seclusion, a “new” kind of awareness and knowledge of God’s intentions for humanity with regards to the resurrection can enter we who are represented by the seven sleepers.

The Particulars for "Spelunking the Seven Sleepers” 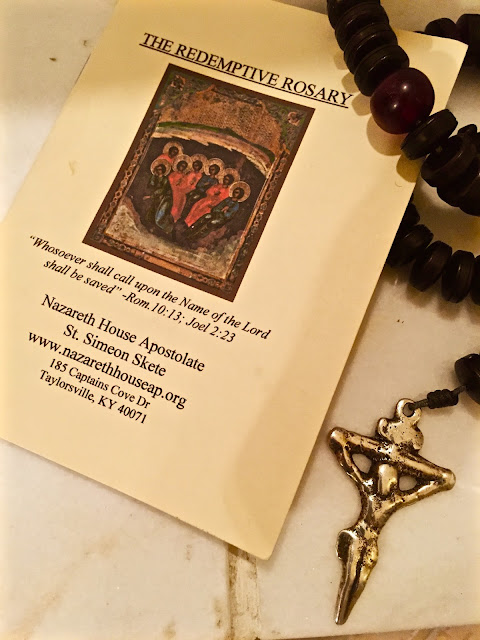 I tremble when my thievish doubts
draw near.

It is a gift my Love has given me
to keep in trust.

Though blind, by it I see;
Naive, I am made wise.

The Seven Sleepers know this Love.
They are my friends.

Time stops in the shadow
Of their mountain  (Mt. Celion).

In its hush my Love returns
To claim His pearl.”

It is not about how we were, but about us as we are, a resurrected people now.  It is about Malcius who, as us, was awakened in the Cave and walked out into Ephesus with the old coins that showed the world in turmoil.  May we be good stewards of these nine most Holy Coins. 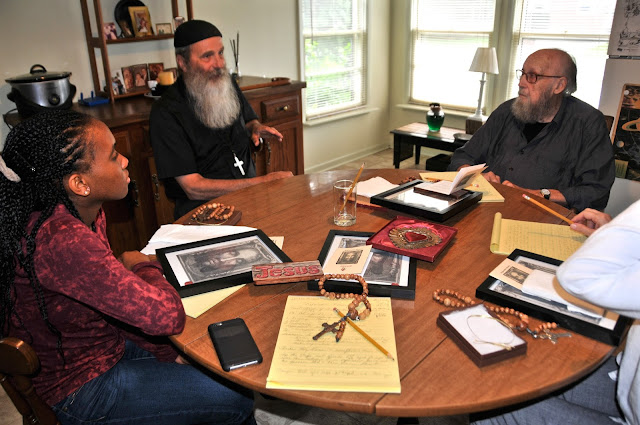 Seraphim has been prayerfully developing the Reparation Rosary since the 1970’s and on July 8, 2015 it was officially inaugurated as the 3rd and Final Strand of the Prayer Rope of St. Simeon Skete.

“Now I rejoice in what I am suffering for you,
and I fill up in my flesh
what is still lacking in regard to Christ’s afflictions,
for the sake of his body, which is the Church.” -Col. 1:24

Definition of Reparation: fix, repair and restore.  -Hence, making reparation for the blasphemies, outrages and crimes committed against our Lord God within and through the Church and the world.  There is much work to be done.

The Program of Reparation:
“If my people, which are called by my Name, shall humble themselves, and pray, and seek my face, and turn from their wicked ways; then will I hear from Heaven, and will forgive their sin, and will heal their land” -2Chron. 7:14

We launched the Reparation Rosary by first praying it and then discussing what it means and how it is to be used.

Seraphim talked about when he first went to Sierra Leone, it was to make repairs for the violence.  Repairing violence with prayer and love.  From the war stemmed hunger, repair hunger by giving someone some food.  Seraphim carefully reminded us that this rosary is not a revengeful tool to get back at those that have done wrong but that the driving motivation is to repair what has been done wrong in the eyes of God, i.e. If God’s Name is misused, make repairs by praising His Name and using it properly.

This Reparation Rosary is not about reprisal but hopes to stop the offense before there is a need for reparation.  Our drive and motivation is that there are no offenses.

Our Patrons of Reparation: 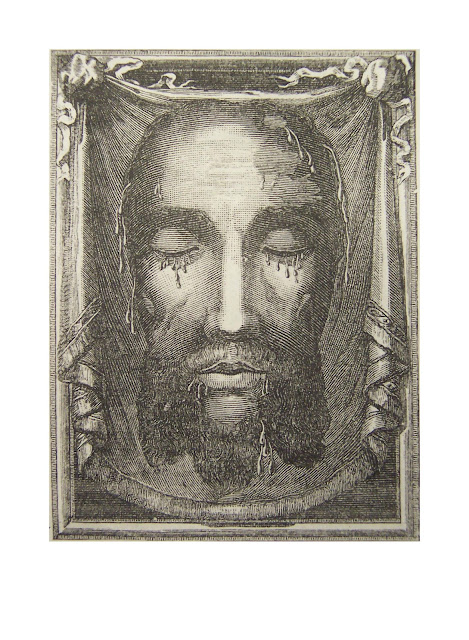 “The Prayer of Reparation seeks to make whole what is fragmented by putting love where there is none, by gazing with reverence upon Him who men disdain, i.e. “The one from whom men hide their faces” -Isa. 53:3. Abortion is an outrageous blasphemy against the Holy Face of Jesus because it prevents a child’s face from seeing another human face (Ex.20:13; 1Cor. 8:12; Mk. 9:42; Mt. 25:40). It also is an offense against the Most Sacred Name of Jesus because abortion prevents putting a face to a name. Putting a face to a name has great effect. When the soldiers came to the olive grove in search of Jesus, he met them asking: “Who are you looking for?” and they replied “Jesus of Nazareth” and Jesus responded “Iam he”.  When Jesus said, “Iam he,” they drew back and fell to the ground. (John 18:3-6). satan and his co-operatives want to keep separated the Most Holy Name of Jesus from His Holy Face. But when Jesus was named satan was disarmed! Note well, the Face of Jesus is intended to change the face of the earth (Lk.1:31: 2:21; Phil.2:9-11). "

"To be one who makes repairs is to give our Lord what others deny him. Just recently I was told of a television show that featured various people urinating on the Crucifix of our Lord. Upon hearing this I immediately went to the prayer chapel and placed eleven crucifixes on the altar, lit a candle that I intend to keep burning for 40 days and then offered incense in a deep spirit of reparation. Our Lord said “I thirst” (Jn.19:28). This thirst continues unquenched because it is a thirst for souls, faith, hope, love, thanksgiving, petition and adoration. Our Lord’s thirst will continue until the end of time but so will the call to reparation continue among and in his people."

"The Face of Jesus, the Name of Jesus and now the Heart of Jesus seen in his Name and of his Face: It wasn’t until the seventeenth century that the organ of the Heart with its crown of thorns and flame of love began to appear. The more ancient images of the Sacred Heart was that of the wound itself in the side of our Lord’s body. 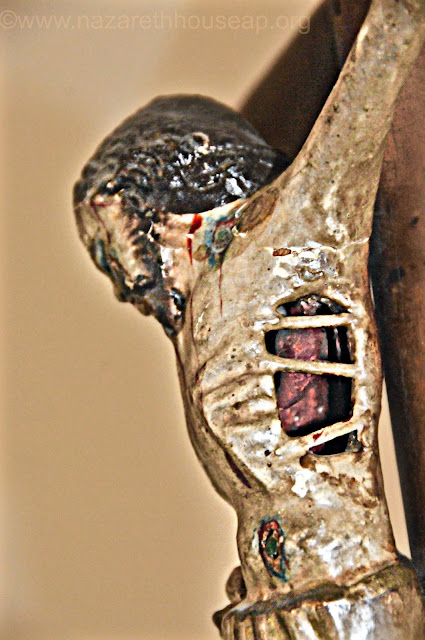 The open Wound was in itself an invitation to press beyond it, to cross its threshold, to make one’s dwelling in the inner sanctuary of the Sacred Heart but the Heart remained hidden. We must be careful in taking the Heart of Jesus and enthroning it by itself, in doing so we run the risk of taking the Heart without the Wound. One must be wounded to embrace His woundedness to get to His Heart. 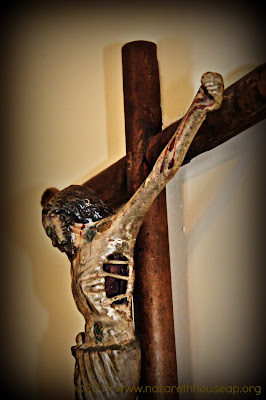 "Finally, reparation is the unceasing effort to bear witness before endless crosses on which our Lord continues to be crucified.  Experiential Reparation makes present in the history of humanity the force of redemption.” -Seraphim