After over twenty-six hours of landing and take-offs, flying in air, airports & layovers, we finally touch down in Lungi. If you have ever been through the Sierra Leone Lungi Airport, you know the craziness just begins upon deplaning.

It is always the part of the adventure that we dread the most FNA - Freetown National Airport, Lungi, Sierra Leone. As the plane taxied to the "gate" (what gate?), I called James who should have been waiting for us outside the airport. It turned out that James was just arriving from the Ferry that crosses the bay from Freetown to Lungi. He had been waiting (car loaded) for the Ferry to take off since 11 AM that morning, finally some 8 hours later, it made its journey just as we were landing. Still having to drive from the Ferry to the airport, James quickly called his cousin, Captain Brima Koroma to meet us. 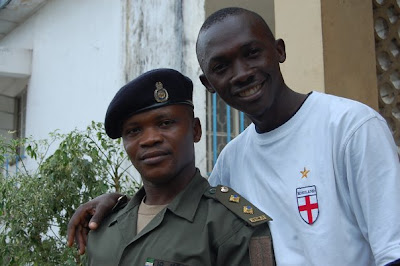 As we enter the line to go through customs, Captain Brima yells "Mama Vicki" and quickly takes charge to expedite our entry into Sierra Leone. 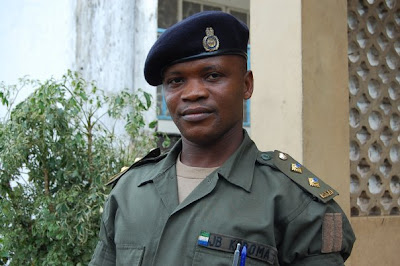 Stunned by the speedy process we've just encountered, we find ourselves standing in the parking lot, baggage in tow, waiting for James to arrive from the Ferry. It was unbelievable to breeze through FNA in a matter of 15 minutes.

Thank you Captain Brima! Fr. Seraphim and I will always be in awe of your professional, commanding spirit and tremendous capabilities. We love you and miss you! Our prayers will be always with you as you serve your country. 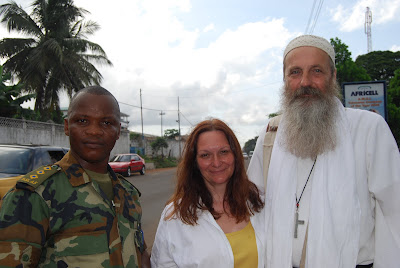 The next day after Brima escorted us through the Airport, James received a call from him informing us he had just been promoted to Captain! Congratulations, Captain Brima. His post now places him in charge over the recent problem of "night carpenters" aka armed robberies that have plaqued Freetown in recent months.


Soon we see James in the little red car we are so thankful to rent from Sanu. 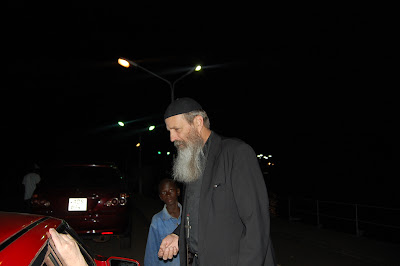 Loaded up and ready to depart the airport, our next challenge is Freetown. It didn't seem the helicopter was flying anytime soon and the thought of taking the Ferry at night was too frightening. We considered grabbing a hotel room in Lungi and making the journey in the morning, but James insisted that after waiting all day to take the Ferry he was not in the mood to waste another day waiting for the ferry to go the next day. Therefore, we decided to cross at night.

Having had a ferry full of people recently sink in Sierra Leone with no rescue operations per se in planning... I was very leery! Father Seraphim was willing to go for it, "You can't scare me with heaven..."; James was more than ready to try it, so I consented. 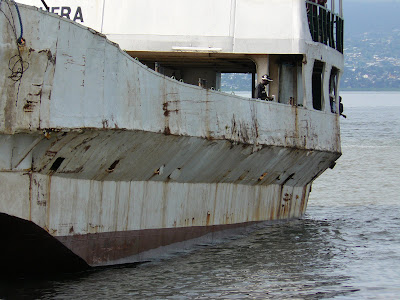 You see, even in the daytime, the looks of the Ferry tend to raise the hair on your back, but a night time voyage... Oh my.... 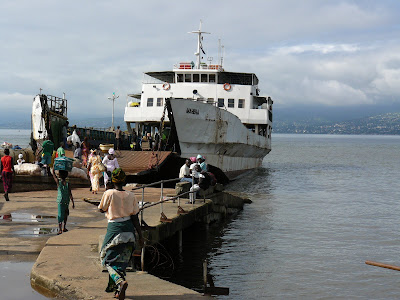 A little wait in line to board the ferry and we finally drive onto it. Here we go. 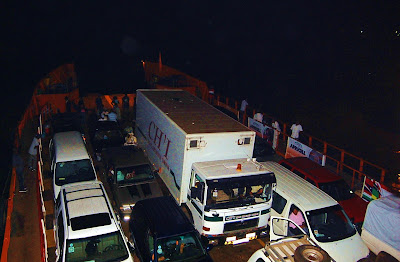 Immediately, as Fr. Seraphim takes a seat up on the upper deck, people begin to question him about his prayer beads. 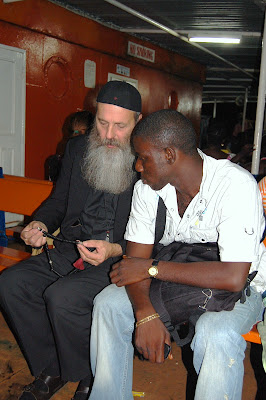 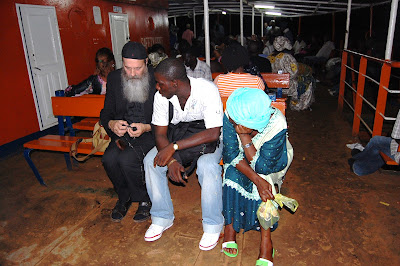 As we arrive at the port, I look out at a anchored boat, floating nearby...it is my first sight in Freetown... Written on the boat are the words, 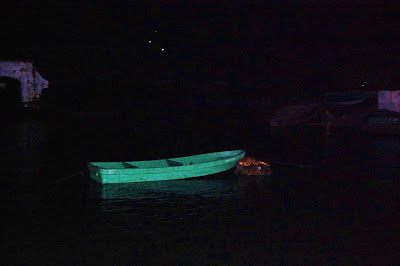 "BELIEVE IN GOD", what a beautiful welcome! Hello Freetown! The journey begins...

"His dominion shall be also from one sea to the other *
and from the River unto the world's end". Psalm 72:8
Posted by Vicki at 2:13 PM