Mangoes & Rice: A Report from James in Freetown 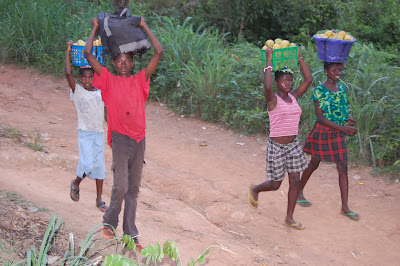 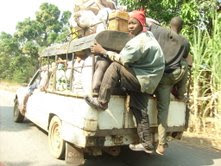 Imported rice from Thailand namely Parboiled, Triple AAA and Bella Rosa to name but these three has taken a toll in the markets making it very difficult for the ordinary man to meet a whole bag, instead some go for the half bag which is 25 kg and majority do with the one cup service which is meeting what you can afford for a day and then leave the following day to fend for itself.

For some, especially up in the provinces, a mixture of rice and Bulgur (some kind of brown wheat also imported) which is usually being used to feed pigs, is being blended together to make a perfect family dinner.

The other day, i sat together with a group of fellow photographers at the Sun Colour Photo Studio down Sanders Street and I noticed several push carts carrying bags of rice, old and young men sweating and forcing more rice with their wheelbarrows. Printed on one of the rice bags was USAID,followed by a small writing at the bottom - A GIFT FROM THE AMERICAN PEOPLE. These lines throw lots of question to us and we started debating about it. The argument was, was this sent to us as a gift when people we are paying for it? This remained unanswered.

Let's say, where man fails to come to our rescue, God is always there to help. The months April and May has been good indeed bringing forth more mangoes to help combat the hungry homes. It was said years back that people in Freetown only eat mangoes to balance their diets but my pictures are saying the opposite. More homes are making better use of it including St. Laurence House forgetting this diet balance thing and using mango as a way to ward off hunger.

In Kabala, it is very difficult to tell whether mangoes should be eaten at a certain time because people sleep, wake and dine with it twenty four hours a day.

My fear is what will people do when all this mango season celebration will be done in a months' time and the rice prices still the same or worst?
Posted by Vicki at 6:31 AM