Mako back at University 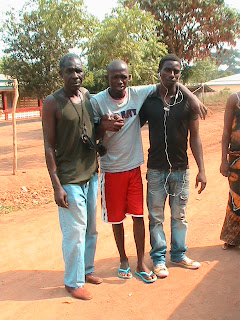 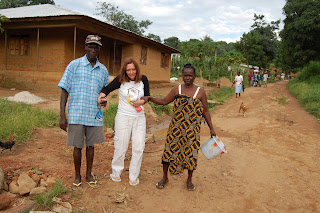 Mako is recovering quite well, although he still suffers some residual pains of the last illness. James sent the above picture of Mako (Mako is the young man in center of photo) as they were assisting him to the car when he was very ill, you can see the pain and anguish in his eyes. Those guys in the photo were getting him to the car for the long drive to Freetown to seek medical aid. Mako's picture brought back memories of when I was in Kabala a few months ago and "mysteriously" came down with a similar extremely painful illness. Pa Foday and Mama Fatu helped me to the car and I endured the long ride to Freetown, complete with check point investigations and all. Both Mako and I were lucky to have survived. There were times for each of us when we were not too sure of the outcome. I included the picture of me being helped to the car because the similarities are so pronounced. In fact, when I became "ill" Mako rode in the back of the car with me until we reached the main road in Kabala. He tried so hard to help me while I rolled around in pain. That is why it is especially difficult for me to see him go through the same situation, I wish I could have been there for him as he was for me. (Click on each photo to enlarge)
Posted by Vicki at 7:09 PM