I have been reading reports this weekend about unrest in Freetown. Political rivalry raising its ugly head, again. I had hoped it had been settled, but today I received the following email from James: 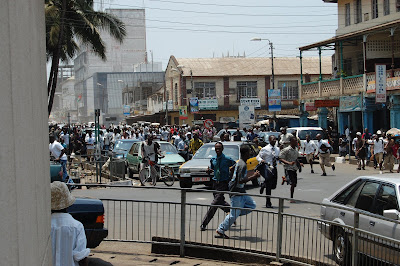 (Photo property of NHA Media , Mar 16 2009) People are running from the perceived troubles.

Good Morning. I got your text messages few minutes ago while rushing in Sanu's car to pick girls from school. Lucy Called using a friends phone that their school authorities had asked all parents to come get their kids. There seems to be a fight and some troubling developing between the APC and the SLPP downtown. It started few days back. Most shops were closed since Friday and it seems going on again today. So I gathered the girls from school but will be checking the situation downthere. I called a friend and he said its ok there - but you never know. All this reminds me of Father Seraphim's warning a few weeks back and his words about watching out for Salone's possible turmoil. It seems people are beginning to look for more trouble. We are praying against this. I will go soon to see if I can get on with my duty at hand.
I will get back to you soon.
Pray.
James 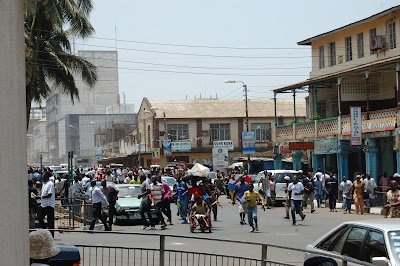 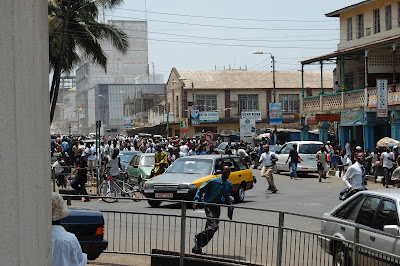 The above photos were taken today 16 March for NHA Media, they show the restlessness in the streets. Notice the poor wheel chair man and the others. This is the area of Freetown where they go to beg for assistance.

Reuters report from this weekend:

FREETOWN, March 14 (Reuters) - At least 17 people were hurt in Sierra Leone in two days of clashes between supporters of rival political parties armed with rocks and machetes after a council election, police and witnesses said.

In the capital Freetown, the headquarters of the opposition Sierra Leone People's Party (SLPP), the former ruling party, was smashed up and part of it set on fire late on Friday during clashes with supporters of President Ernest Bai Koroma.

A Reuters reporter saw at least 10 injured being treated at a hospital in the city, many with machete wounds to their bodies, shoulders or hands. Witnesses said police had fired shots in the air on Friday to disperse brawling crowds.

On Saturday armed police sealed off the area of central Freetown, stopping members of the public from approaching the SLPP headquarters compound, where hundreds of party loyalists were still camped out having spent the night there.

Vice-President Sam Sumana called an emergency cabinet meeting at his Freetown residence, and ordered the radio stations run by both main political parties to be suspended.

Koroma's election in September 2007 unseated the SLPP from power, 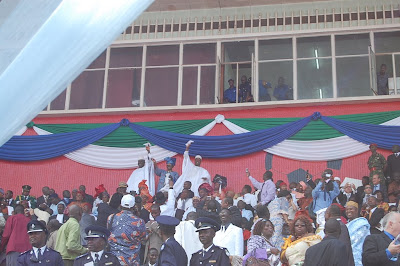 (photo Inauguration Day JBM/NHA photographer)
and the broadly peaceful transfer of power was hailed as a democratic success for a country devastated by a 1991-2002 civil war that killed 50,000 people.

But tensions between supporters of the SLPP and Koroma's All Peoples' Congress (APC) spilled over into localised violence during that campaign and on several occasions since, sometimes involving machete attacks reminiscent of wartime atrocities.

On Thursday, groups of SLPP and APC supporters fought during a by-election for a district council seat in Pujehun district in the generally pro-SLPP south of the impoverished country, which ranks bottom of the 177-nation U.N. Human Development Index.

Seven people were injured and eight others were arrested during the violence in Gendema town, the regional police commander, Assistant Inspector General David Sesay, told Reuters by telephone from the area.

"There was also shooting during the fighting, but with quick deployment of reinforcements of paramilitary police to the area, police were able to bring the fighting under control," he said.

The former British colony is rich in mineral resources, including the rich eastern diamond fields which during the civil war helped fund rebels infamous for murdering, raping and hacking lips, ears and limbs off innocent civilians with machetes.

Charles Taylor, the former president of neighbouring Liberia, is on trial for war crimes for his alleged role fomenting the war in return for diamonds from Sierra Leone.

Since the war ended, local and foreign companies have ramped up efforts to find and mine gold, bauxite and the titanium ore rutile, although Finance Minister Samura Kamara told Reuters last week that revenues would slump this year due to the global economic slowdown. [ID:nL4380362] (Writing by Alistair Thomson; Editing by Giles Elgood)
Posted by Vicki at 10:12 AM