Life of a package traveling from USA to Sierra Leone

For years now Nazareth House Apostolate has tried to find the most cost effective and successful route of getting supplies to Sierra Leone. 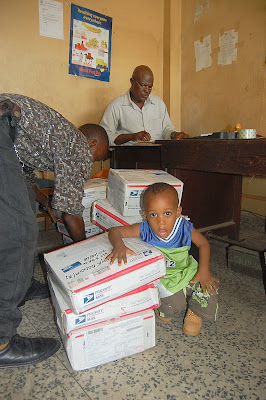 I tried DHL, but that is ridiculously cost prohibitive. Simply, we found that the US POST PRIORITY FLAT RATE BOXES have been very prompt in getting there. Once there, the Freetown post has been great in making sure our supplies get to James. Problem solved. 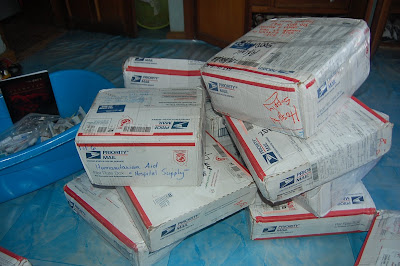 Box after box filled with medical supplies, essentials, and gifts for the poor have been traveling from Louisville to Sierra Leone with reasonable speed and 100% arrival rate.

I recently traveled to Summit Hill, Pennsylvania to meet with my dear friend, Maria Stianchie,founder of ONE LOVE FOUNDATION. 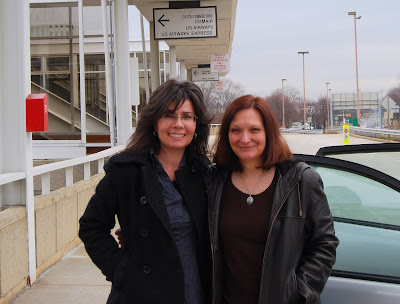 
Maria and I have blended our efforts to make the work possible in Sierra Leone. It is the orphanage that she supports, St. Mary's Orphanage near Freetown, that Nazareth House Apostolate has now also made commitment. 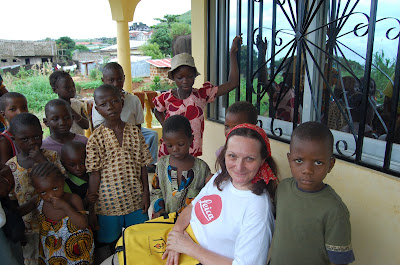 It was Maria who kicked in the final funds for NHA to reach their goal for their last mission trip in September 2008. It was Maria who produced the first funds in hopes of securing Nazareth House's compound. Its that "unity thing" we keep talking about at Nazareth House - to its fullest again. It blows me away, seeing people working together.

While at Summit Hill, Maria told me of the need to get a laptop charger to Fr. Sandy of St. Martins in Freetown. "No problem", I said, "lets go to the post, pack it up and send it to James"; "It should be there in 10 days or maybe longer but it will get there". This has always been the case, so I wasn't concerned.

In Maria's kitchen (which is the place to be in Summit Hill, this woman can cook!), we packed up everything we could get our hands on, including the charger in a nice new US PRIORITY Flat Rate box - white with red/blue lettering. We went to the post, Maria paid the shipping cost and off the package goes. Simple, easy, no problem...

Last week, James got the call, the box has arrived... 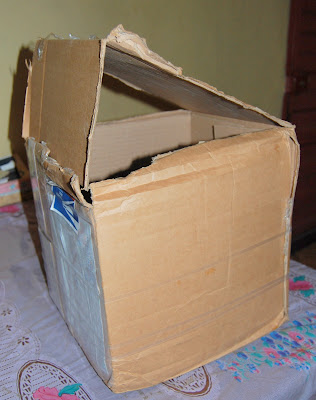 But it was in a totally different box than the one we packed... 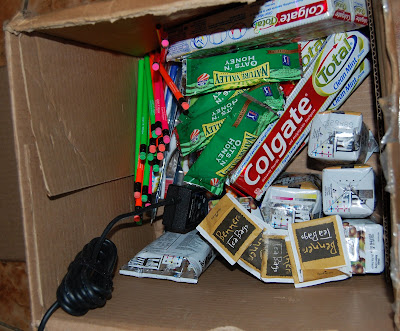 PLUS most of the contents were missing. Of the 500 pencils we sent, only 21 arrived! 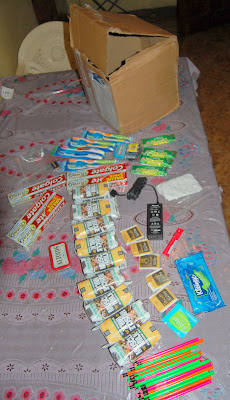 The charger was there but the connectors were not. We packed this box solely for Fr. James Sandy. This young priest works so hard for his people and these were items Maria wanted him to have...even down to the Muscle Milk.

Little Roo took it upon himself to investigate this strange drink 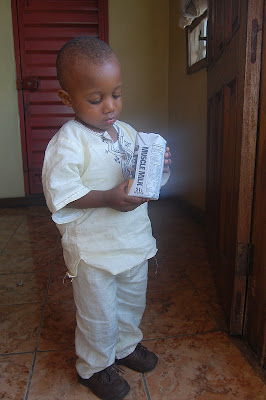 and he believed that a complete, detailed investigation required a taste... 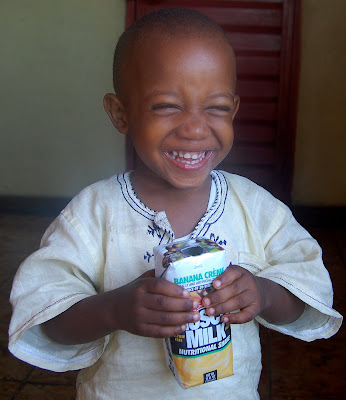 Roo quickly gave his stamp of approval and the drink brought a huge smile to his face. He thinks "THIS IS SOMETHING FANTASTIC!"


James was very disappointed that many of the items intended for Fr. Sandy had been removed from the box. He filed complaint with the Freetown Post but they hinted that it must have happened in America. I hold a different opinion.

I was shocked that these items had come up missing when I have had such a good re pore with the Freetown Postal Workers. They have been very honest and fair with us, no troubles at all. And now, suddenly we have missing packages and this one arrives in a completely different box! James tells me there are new workers at the Post Office, maybe they have not learned proper procedure, not aware of the thing which is right. Despite it all, this is so sad. We have several other boxes out, most importantly some much needed health items for the orphanage. I pray they show up very soon.

James packed up what he has named "Fr. Sandy's Empty Box" and attended Sunday Services at St. Martin's where Fr. Sandy is priest. 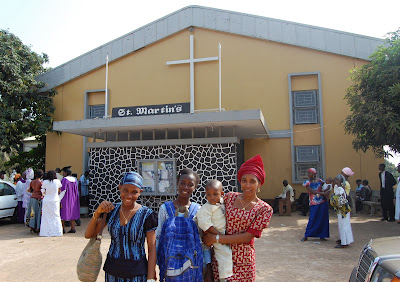 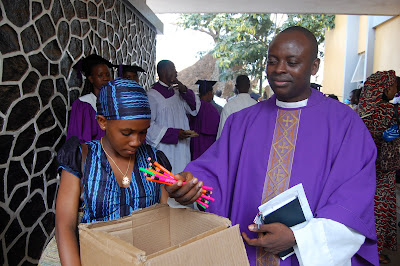 Lucy gives Fr. James Sandy his "empty box" and he checks out his "goodies". 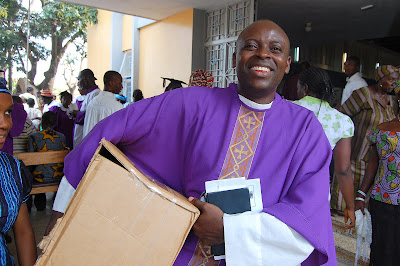 Being the gracious, humble man that he is, Fr. Sandy is thankful for his "empty box" and is anxious to taste the muscle milk. 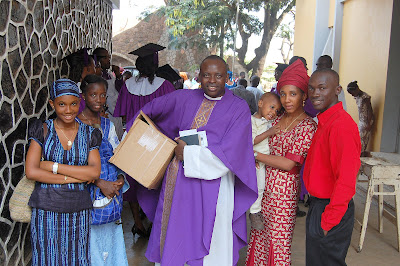 God works in mysterious ways, the ripping open of the box was meant for bad, but God made it for good. James and his family were delighted to meet Fr. Sandy and I know a new and lasting friendship has been formed. Just as Maria and I work together in America; I am sure that James and Fr. Sandy will be work together in Salone.

Reminder, we've been allowed a slight grace period on the rent. There is still time this week to send in your donation. We are in need of $2,200 today. Please consider a gift to keep this beautiful work going. It is so unique because it goes far beyond humanitarian aid, it is building relationships - we're finding out the world is not so big after all. Interaction with our brothers and sisters, despite an ocean in between, doesn't stop us, the love is growing.

or through the website
www.nazarethhouseap.org
left panel, bottom of page DONOR link.

LORD, who shall dwell in thy tabernacle? * or who shall rest upon thy holy hill?

Even he that leadeth an uncorrupt life, * and doeth the thing which is right, and speaketh the truth from his heart.

He that hath used no deceit in his tongue, nor done evil to his neighbour, * and hath not slandered his neighbour.

He that setteth not by himself, but is lowly in his own eyes, * and maketh much of them that fear the LORD.

He that sweareth unto his neighbour, and disappointeth him not, * though it were to his own hindrance.

He that hath not given his money upon usury, * nor taken reward against the innocent.

Whoso doeth these things * shall never fall. -Psalm 15
Posted by Vicki at 2:02 PM