A boyhood friend returns to Salone from America... 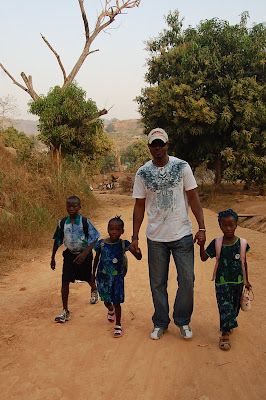 As you've been following updates at the NHA blog the last couple of days, you will notice this one young man helping me out. I need not say much about him for your eyes has seen it all. Alie, as he is called, grew up in the Kono District which is in the Eastern Part of Sierra Leone. Our friendship started in the early years of the Sierra Leone war when he fled after rebels stormed his home town. In Kabala he came to seek refuge but unfortunately we all were chased there again by rebels in November 1994.

Alie's father was one of the victims who suffered severely after a painful death in the hands of brutal rebels of the Revolutionary United Front. Fear of this and more threats of rebel attack landed Alie in Guinea where he was till he seek refuge in the U.S.A.

We were best of friends, walking through deserted and burnt homes by rebels in Kabala looking for our family members. He was with Abu Bakarr, my late brother, a few hours before my brother was hacked to death with machete by rebels in Kabala.

Alie has a good nature about him and makes friends quick. He has always been a friend to my family and kids. He always has time for kids and time to talk and help people even before he went to the States.

After tens years he decided to come and visit and see us all. He and I lost communication while he was in the States but on his arrival in Freetown, he visited St. Laurence House and then saw what I am doing. He decided to help in his own way, helping me out with work in and around Freetown, also came with me to Kabala and help the NHA kids. Alie in tears, could not imagine what he has got himself into. He immediately fell in love with the kids, saw the need and placed himself as part of it. He promised to do all he could to help NHA out in his own little way and provided meal for several kids on the road to Kabala etc.

Alie brought two suitcases full of clothes and ended up taking just two pair of jeans, three clothes and nothing else. He gave away all his stuffs to people and friends he don't even know. After giving all his stuffs out he started looking into my stuffs for one or two that fits him. I smiled as he gave all his stuff away and then had to use mine.

I felt so good meeting him again after ten years and indeed he is a nice JC (Krio meaning a Sierra Leonean that has left and returned "Jus cam". He told me before he left that the work of NHA has moved him more and he so wish to help in any way he could. His girl friend Rugie who lives in Boston after seeing all that her boy friend has done promised to help in her own way too. Can you imagine? Alie's trip was meant for Holiday and he ended up working and giving for NHA. Alie made time to play and talk with the kids, teach them games and said a little about America and the importance of Education. 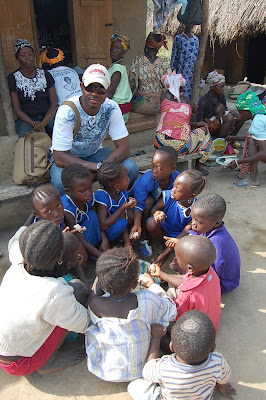 He was still surprised to see me do all this work here. He was so proud of me and what we are doing. Alie said he never knew what was happening here, he knows about it but was not sure things are still that bad and found them even worst than he expected. Looking at the way people were living he was finding it very difficult to cope. Alie likes food so he asked that I eat good everyday. He was so concerned about my welfare and others, because he saw us slim. He knows we need more help here. 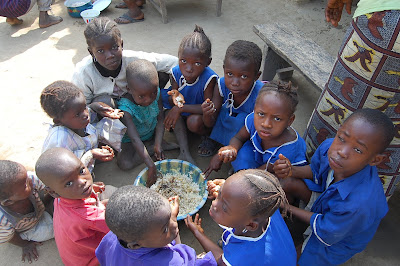 He was amazed to see Lucy growing up to be a good girl now. Alie used to take Lucy everywhere with him just for fun. Things were very every here in Salone were bad the time he left.

I felt so honored to meet this young man. His visit meant a lot to us and the Sierra Leonean community.

As we make our way to Kabala, Alie stopped at every village giving candy canes and whatever he could to kids. 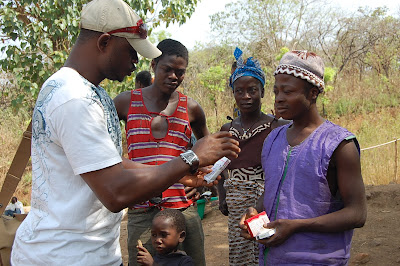 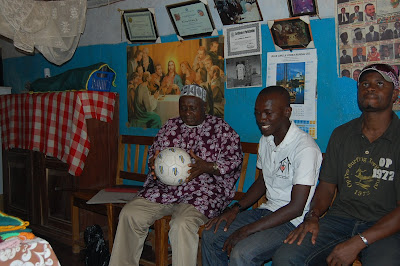 who was complaining of pain and the like so we gave out medication from our Nazareth House stock as well. 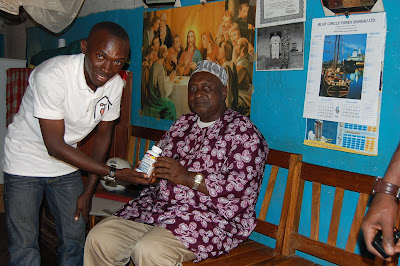 He was so grateful to NHA. 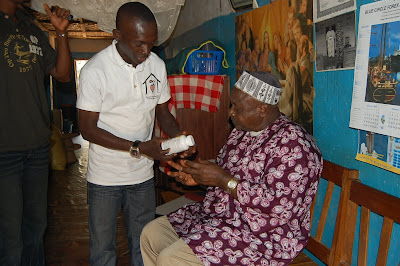 He asks that we continue to do more not only for him but people in his town, I promise to help out whenever I can and with your help I will be able to keep that promise.
Posted by Vicki at 2:17 AM