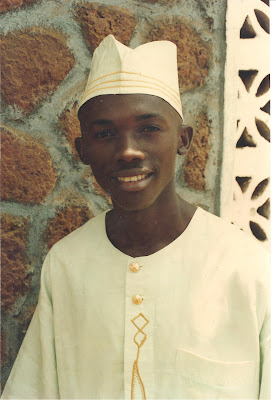 
On Easter Monday, Nazareth House Apostolate has a tradition of packing a picnic and traveling as the men did while Jesus walked with them on the road to Emmaus (Luke 24:13-35) We call it, Emmaus Day or in Coptic Tradition : "Sham el-Nessim".

On Emmaus Day in the year 2000, Fr. Seraphim embarked on a journey of prayer from which Nazareth House evolved. He arrived late in the night onto Sierra Leone soil. Taking a helicopter from Lungi to the capital city of Freetown, he had no idea what to expect or who he would meet when he landed. He only knew he'd be met by a man named Theo Jumu. Theo was there to greet him, but he was not alone. With him was a small framed 22 year old young man by the name of James Bombolia Mansaray, who had a love for cameras. This meeting between Fr. Seraphim and James was NOT by chance, we have no doubt it was orchestrated by God. It was an act of God's grace.

The next day, Fr. Seraphim and James enjoyed conversation as they took a long walk together along the Freetown Beach. 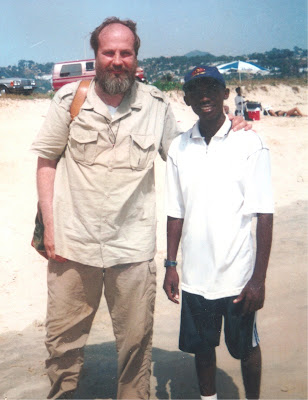 Photo above of James and Fr. Seraphim's first walk along the beach of Freetown. That night Fr. Seraphim was injured (broke ankle in 3 places) but continued visiting the amputation camps, with James by his side. A bond was formed. 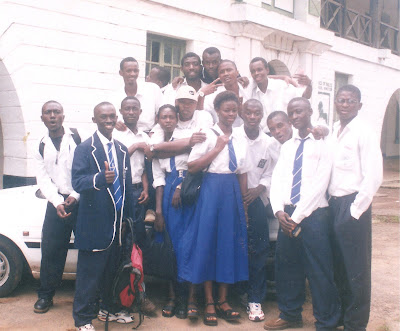 James was finishing schooling when he met Father. The above picture is of James with his classmates June 2000.

After Fr. Seraphim's return to the States, we knew that we could not "look away" from the poverty, the tragedy, and all that embodied Sierra Leone. Sierra Leone was crying and we could not ignore this. It became our mission.

James knew how to handle the internet well, even suffering the decrepit, backward servers that the Freetown Internet Cafes offered. He sent an email to me and communication began. We emailed back and forth daily which has continued to this day.

I fell in love with this strong young man. 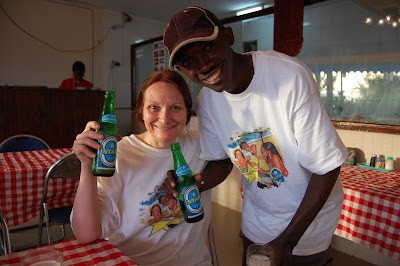 I learned about his fleeing from Kabala to Freetown during the war, hoping that the Capital City would be safe. His elder brother had been hacked to death in Kabala by the rebels. Many days he laid on the floor with his siblings in a Freetown building whilst gunfire and rpg's raced through the windows. 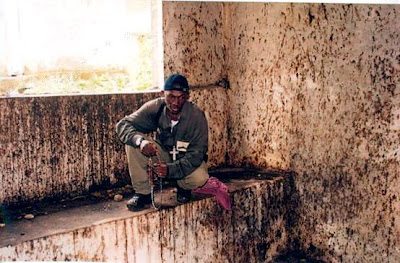 James took charge and protected his siblings during all that horrific war. As the war lessened, he worked to see that his siblings got into school, he was selfless and courageous. The above photo is of James praying the rosary in the blood-splattered killing house used by the rebels during the war to rape, kill and amputate the people. James went there to pray light in an area of darkness.

Later in December 2000, Fr. Seraphim returned to Freetown, equipped with supplies and small amount of medication and a camera for James. 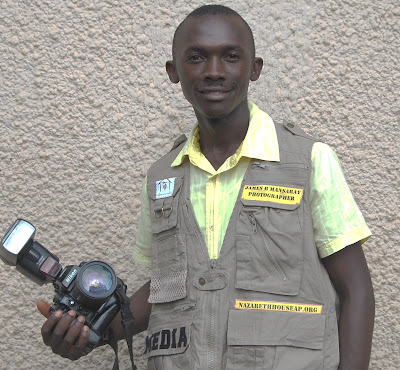 In its early stages, Nazareth House went through several expected mistakes, some ups, some downs trying to coordinate the organization, living in one country and working in another - an ocean apart. At the time, James was not yet the director in Freetown. We were using another man. As time went on, the integrity, the loyalty, the love, the honesty, the strength and the incredible savvy-ness of James began to shine through...louder and louder. He truly is a remarkable man. 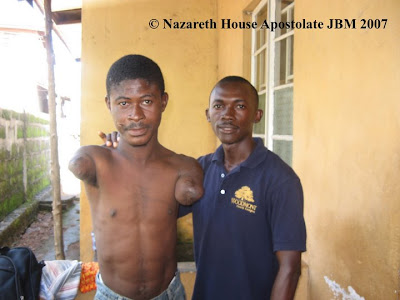 Realizing such great character and ability in him, we made James the director of our Sierra Leone operations and from there Nazareth House began to grow More lives saved, more work accomplished. 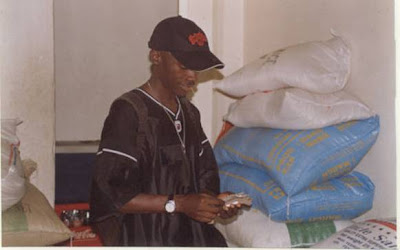 In April 2002, we rented our first St. Laurence House. James, Kadijah and Lucy moved in and began the work of NHA. 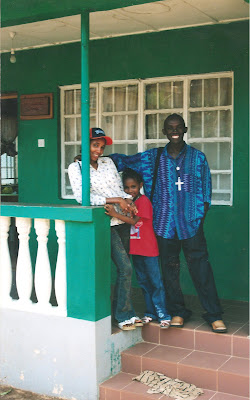 Together with his camera, James busied himself with providing and documenting the needs of others. Each click of the shutter on his camera, is as a click of Fr. Seraphim's beads. It is a prayer. Every face you see on his photos is a face of prayer.

Through our daily emails, James and I were getting to know each other very well. I fell in love with him immediately. He has become NOT like a son to me and Fr. Seraphim. HE IS OUR SON. 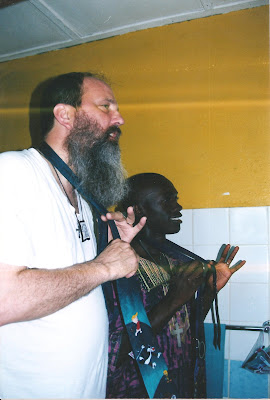 As Nazareth House grows so does our love and respect for James. I repeat, he IS our son! Of course, with every parent/child relationship you have those little annoyances... like loud obnoxious high pitched singing...(we actually love the singing, always brings a smile). But as far as dependability and trust, we know without a doubt he is doing the best for Nazareth House Apostolate and for the people we serve.

Although married prior in African Tradition, James and Kadijah were married at St. Laurence House in 2002. Together they make an awesome team and great asset for Nazareth House. 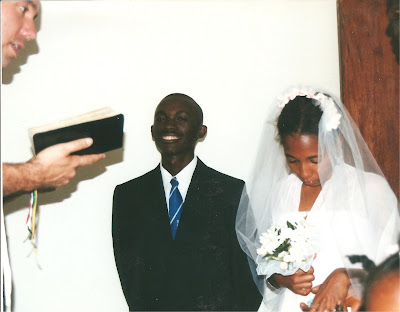 His family, you've met in previous posts on this blog, is quite remarkable themselves. Each having their own unique talents and abilities to bring to our work. 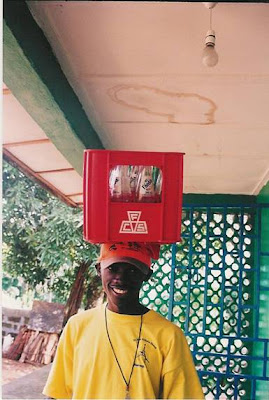 What this young man has been through and conquered in his young life is something most of us will never have to suffer or even consider. He gracefully handles the struggles of daily life in his country with dignity and perseverance, not blinking an eye or giving complaint. Dealing with each moment as it comes. ...tainted water in the water system -you boil it, no electricy - you light a candle, your belly is hungry - drink lots of water to make it feel full, death all around you - give them comfort and love. 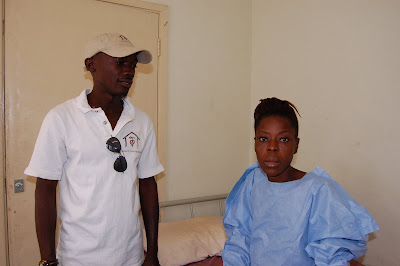 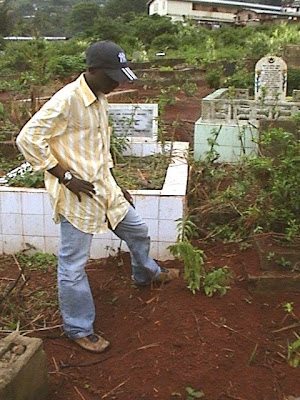 James made huge sacrifices to get our Kabala School up and running. He made that horrible journey back and forth from Freetown to Kabala. He gathered the materials,encouraged the workers, he did it all. Without him, the school would be still a long time coming. We are so grateful for his enormous gift to us of his time, talents and energy and labor. 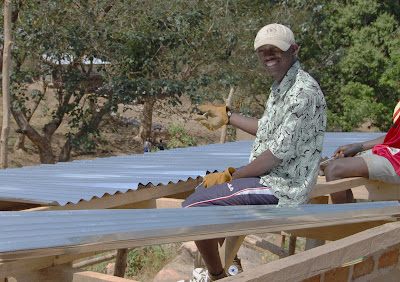 I could go on and on with wonderful things to say about this talented man, my son, but I think you know it all already for yourself. You've read it in his writings and viewed it all in his awesome photographs. 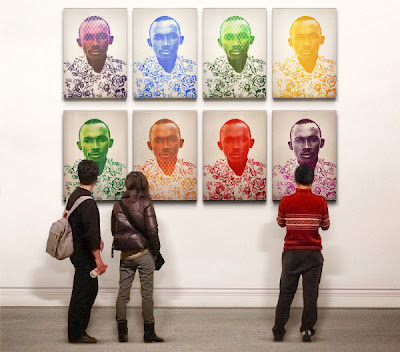