This is the second of the two-part writing of Seraphim's on  A Quiet Resigned Entrustment to the Rosary. 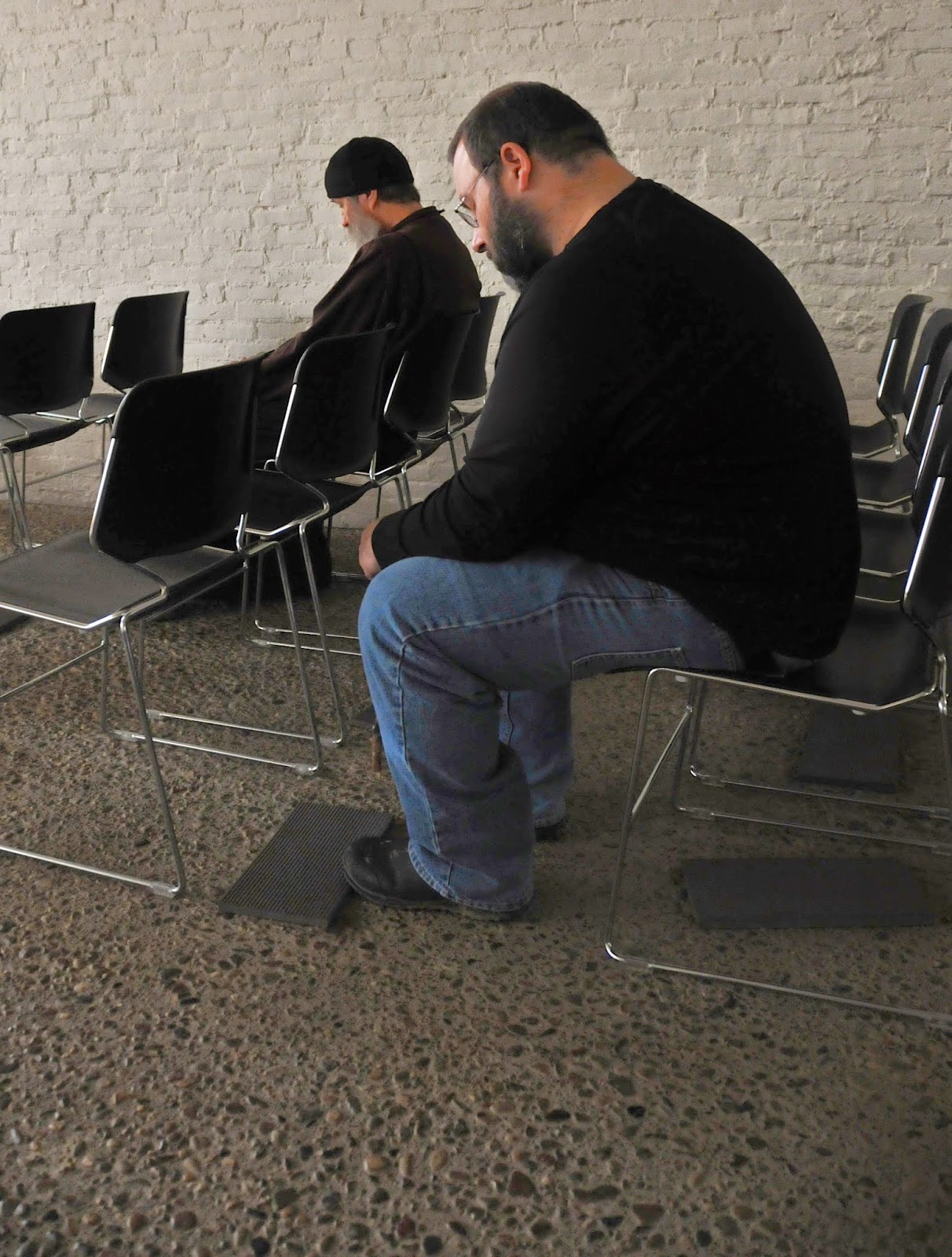 From the Babushkas of my youth I learned and am learning what they knew, how to entrust the circumstances of life to the Rosary.  Hence I’ve taken to heart the lead of a great Rosarian, Pope John Paul II.  I’ve found him and his teachings on the Rosary to be an inspiration. In the times we live, his and the Babushka’s practice of entrustment to the Rosary is needed all the more.  To understand this idea of entrusting to the Rosary, may the following excerpts from Pope John Paul II’s Angelus Addresses be of help.  I commend them to you with the hope that they’ll inspire and encourage you to take up the Rosary with new found fervor and hope. 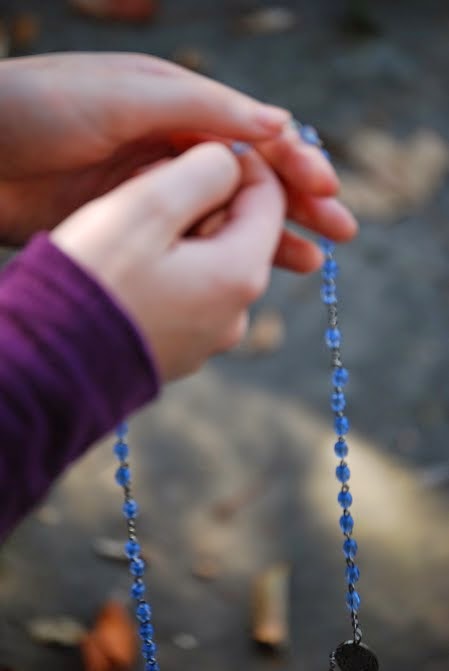 By way of introduction let us address the question, “Why was the Rosary Pope John Paul II’s favorite prayer?

During World War II, when the Nazis were trying to destroy Poland, young Karol Wojtyla (John Paul II) and his teenage friends were members of a living Rosary group.  Here he learned to entrust.

When Karol became Archbishop of Krakow, Poland, he faced huge challenges.  Each day he engaged in an intense battle that sought to destroy the Church.  One of the ways he contended with these forces was to visit his favorite Marian Shrines where he would walk the grounds and pray the Rosary, asking our Blessed Mother to intercede for him.  During these times of prayer he received solutions to some of his most difficult problems.  By praying the Rosary at these shrines, some of his greatest problems were resolved.

When Karol Wojtyla became Pope John Paul II, he continued his practice of praying the Rosary daily.  After lunch he loved to contemplate the mysteries of the Rosary in the Vatican gardens.  John Paul II understood that Jesus gave his Mother Mary to each one of us as spiritual mother. This is why he had the phrase “Totus Tuus” on his coat of arms (“I am all yours Jesus, through Mary”).  John Paul II learned experientially that the closer we come to Mary, the closer she unites us to Jesus and the more we can entrust to Him in the Rosary.

Now to Pope John Paul II’s words of entrusting to the Rosary:
“The Rosary is my favourite prayer.  A marvelous prayer! Marvelous in its simplicity and in its depth.  In this prayer there passes before the eyes of the soul the main episodes in the life of Jesus and they put us in living communion with Jesus through - we could say- his Mother’s heart.  At the same time our heart can enclose in these decades (episodes) of the Rosary all the facts that make up  the life of the individual, the family, the nation, the Church and mankind.  Personal matters and those of one’s neighbor, and particularly of those who are closest to us, who are dearest to us.  Thus the simple prayer of the Rosary beats the rhythm of human life.

During the last few weeks I have had the opportunity to meet many persons, representatives of various nations and of different environments, as well as of various Christian Churches and communities. I wish to assure you that I have not failed to translate these relations into the language of the Rosary prayer, in order that everyone might find himself at the heart of the prayer which gives a full dimension to everything.

In these last weeks both I and the Holy See have had numerous proofs of goodwill from people in the whole world.  I wish to translate my gratitude into decades of the Rosary in order to express it in prayer, as well as in the human manner; in this prayer so simple and so rich” - Angelus Message, October 29, 1978

“Within the current international context, I invite all to pray the Rosary for peace, so that the world can be preserved from the wicked scourge of terrorism.  The terrible tragedy of September 11th will be remembered as a dark day in the history of humanity.  In the face of this, the Church tries to be faithful to her prophetic charism and remind all men about their duty to build a future of peace for the human family. Certainly, peace is not separated from justice, but it must be nourished by mercy and love.  We cannot forget that Jews, Christians and Muslims adore God as the only God. The three religions, therefore, have the vocation of unity and peace.  May God allow the Church’s faithful to be agents of peace, in the front line of the search for justice and the prohibition of violence.  May the Virgin Mary, Queen of Peace, intercede for all humanity, so that the hate and death never have the last word!”  October 30, 2001

“I wish once again to entrust the great cause of peace to the praying of the Rosary.  We are facing an international situation that is full of tensions, at times threatening to explode.  In some parts of the world, where the confrontation is harsher - I think particularly of the suffering land of Christ - we can realize that, even though they are necessary, political efforts are worth little if one remains exacerbated in his mind and no one cares to demonstrate a new disposition of heart in the hope of reviving the struggle and effort of dialogue.  Who but God alone can infuse such sentiments? It is more necessary than ever that from every part of the earth prayer for peace be made to Him.  In this perspective, the Rosary turns out to be the form of prayer most needed.  It builds peace because, while it appeals to the grace of God, it sows in the one praying it the seed of good from which we can expect the fruit of justice and solidarity for personal and community life.  I am thinking of nations and also of families. How much peace would flow into family relationships if the family would begin again to pray the Rosary.” -June 29, 2002 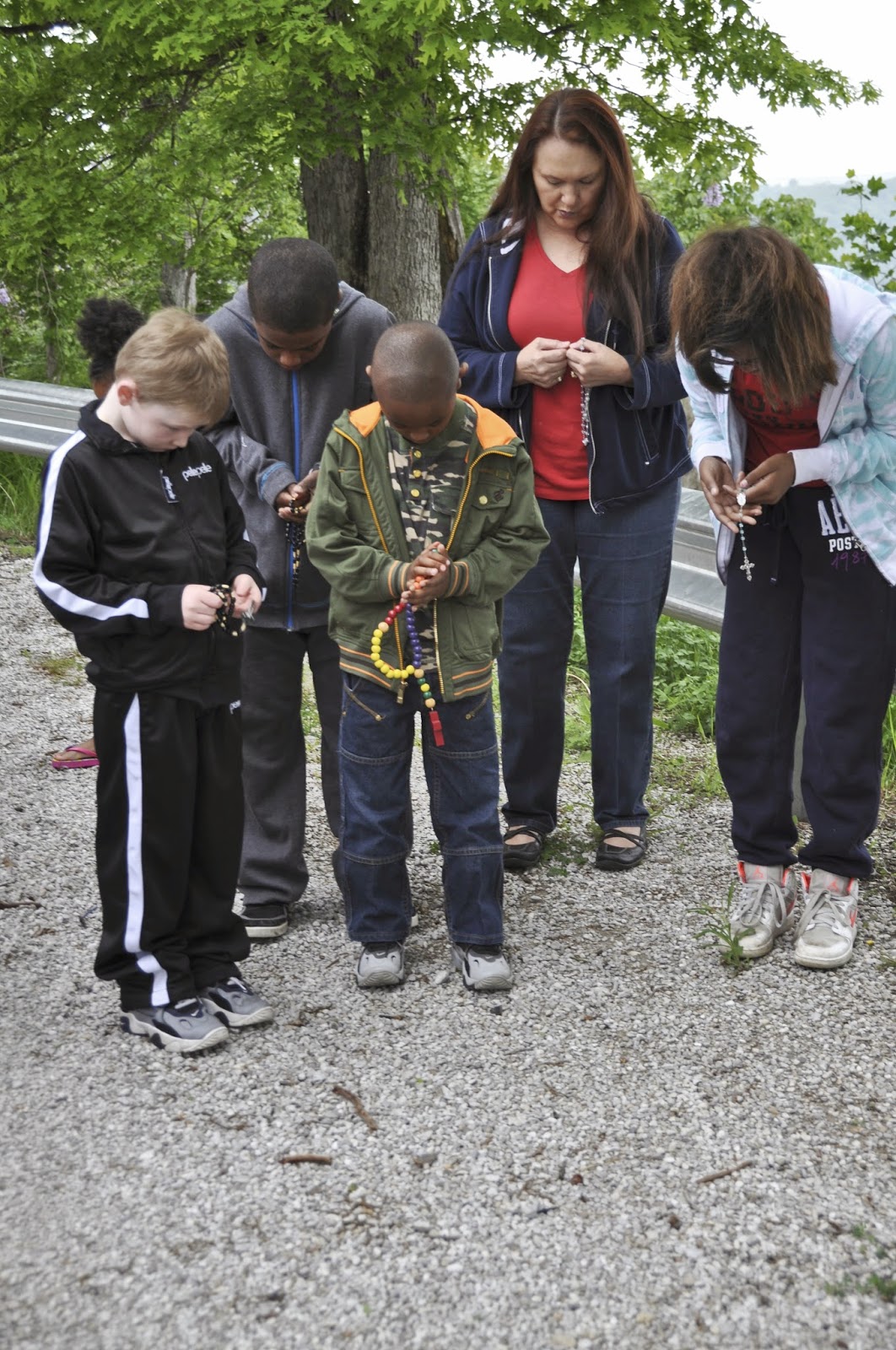 As I’ve been penning these lines I’ve done so with the Rosary held in my left hand. Holding that which is holding us must become a way of living, a way of entrusting.  Praying the Rosary is praying the Life of Jesus in union with Mary who said yes to that Life.  Sometimes circumstances become so harsh that the best we can do is simply hold the beads and trust.  At this level our Lord’s words “Come unto me all ye that labor and are heavy laden and I will give you rest” (Mt. 11:28) reach a deeper and most needed meaning. 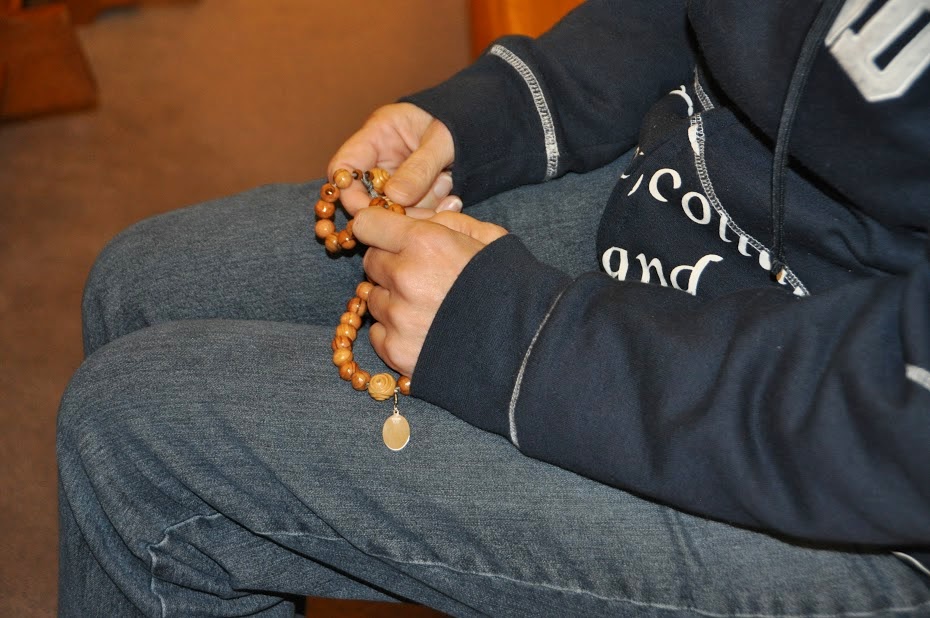 One of the saddest verses in the Bible is found in Isaiah:

May we say, “I know whom I have believed, and am persuaded that He is able to keep that which I have entrusted unto Him until the day of His return” - 2 Tim.1:12

May we obey, could it be the obediences of our lives are the prayer beads of God by which we realize His holding?

Being absorbed into the prayer  that is praying us,
Seraphim