Alimamy took care of the sick, Goodbye dear friend Salone will miss you! 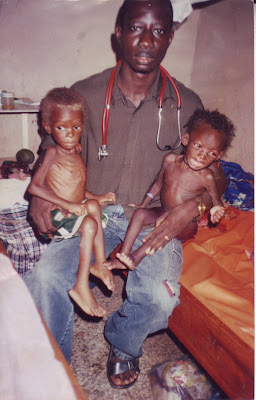 above picture: Alimamy attending to two ill and starving children.

Report by James Mansaray, Nazareth House Freetown:
It was on a rainy Wednesday morning that I got a text message from Mama Vicki announcing the death of our beloved aunt Nancy of Grace Church. Yes, it was said by her doctor that she will be passing on but the right time was to be decided between her and Jesus. This message was received with pain thinking of how much aunt Nancy has blessed and loved many here in Sierra Leone. For Lucy and Ann Marie, it was all tears whilst Kadijah could not say nor eat anything for the rest of the day.

Three hours later, we were again struck with the news of death of Alimamy Samuel Gebateh ( my brother's wife - Hannah's elder Brother) at the Wilberforce 38 hospital. This is another blow to St. Laurence since he was one of our main medical persons here in Freetown.

Fr. and Mama Vicki happened to meet him a year ago when Little Roo was a baby. Alimamy did all he could to make sure that Roo got his circumcision surgery done well and at a very low cost.

ALLMAN as I always call him died at the age of 33 leaving behind a beautiful Daughter, several brothers and sisters, aging parents and a host of responsibilities. All his life, Alimamy grew up in Kabala and after high school got him self admitted at the Bo Paremedic school where he attained great knowledge as a medical officer. As the war intensifies, Alimamy got his first job working for a group called DOCTORS WITH OUR BORDERS in the Port Loko Kambia District and did all he could to help heal war victims and sick people in that area. With time and as the job fades away, he took on the task to set up a private Pharmacy here in Freetown. Alimamy became like a father and and everything not only for the people of Grass Field, Lumley but for many people here in Freetown. Alimamy is one of the medical men that will treat you first before asking for money. When his tribute was read yesterday at the St. Luke Church, he left behind fifteen million leones ($5,000) that poor people owed to him in unpaid medical fees.

Strange black signs under his feet was the seed of all this. Later on he was said to to be suffering from lungs infection, God only Knows whether he must have contracted this disease as he was trying to helped thousands of helpless sick people. Having lost his only love for reasons best known to her, Alimamy begins to deteriorate fighting hard to help him self up. (His wife left him) At his sick bed, he was giving instructions and helping sick people through his mobile phone. A patient was at the point of death in a bed adjacent to his at the 38 Hospital and the doctor in charge finding it very difficult to find his vein for an IV --it was Alimamy how came to his rescue.

The Youngest Medical Officer at the Milton Margai College of Education and Technology. Godrich Campus was also working hard spending more time to improve and become a better helper to the suffering Sierra leonean died leaving so much undone behind him. Quoting his words when I last saw him, " James, I feel so bad that I don't have the strength to go and see my sick patients, that's why I am telling this doctor here to do all he can to make me well." I just could not look into his eyes at that moment. I remembered him helping me survive the terrible Typhoid disease that almost killed me last year, it was this brave man that helped me through it. It was very difficult for me to stand this moment.

I will end by saying that please keep praying for this family that he left behind, especially his six year old daughter. She has gone through a lot and needs all of us to help her out from this great loss. She is attending the same school as Lucy and Ann Marie and she will probably be in the care of Paul and Hannah.

He has been blessing not only to Nazareth House Apostolate but the nation as a whole. We will miss him.