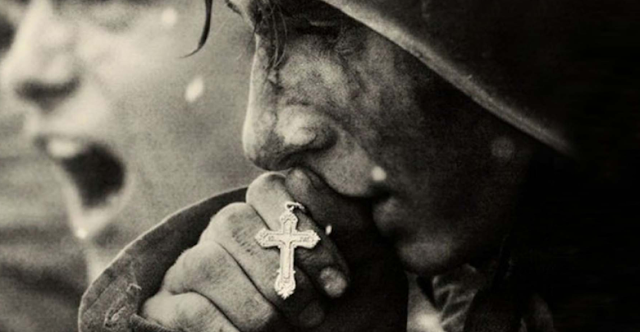 The above is a 1916 photo of a soldier in the midst of heavy battle; he clings to his rosary, preparing for death.

On August 6th, 1945 at 8:15 AM Japan Standard Time an American B-29 bomber, The Enola Gay, drops the world's first atom bomb, over the city of Hiroshima. Approximately 80,0000 people are killed as a direct result of the blast, and another 35,000 are injured.  At least another 60,000 would be dead by the end of the year from the effects of the fallout. 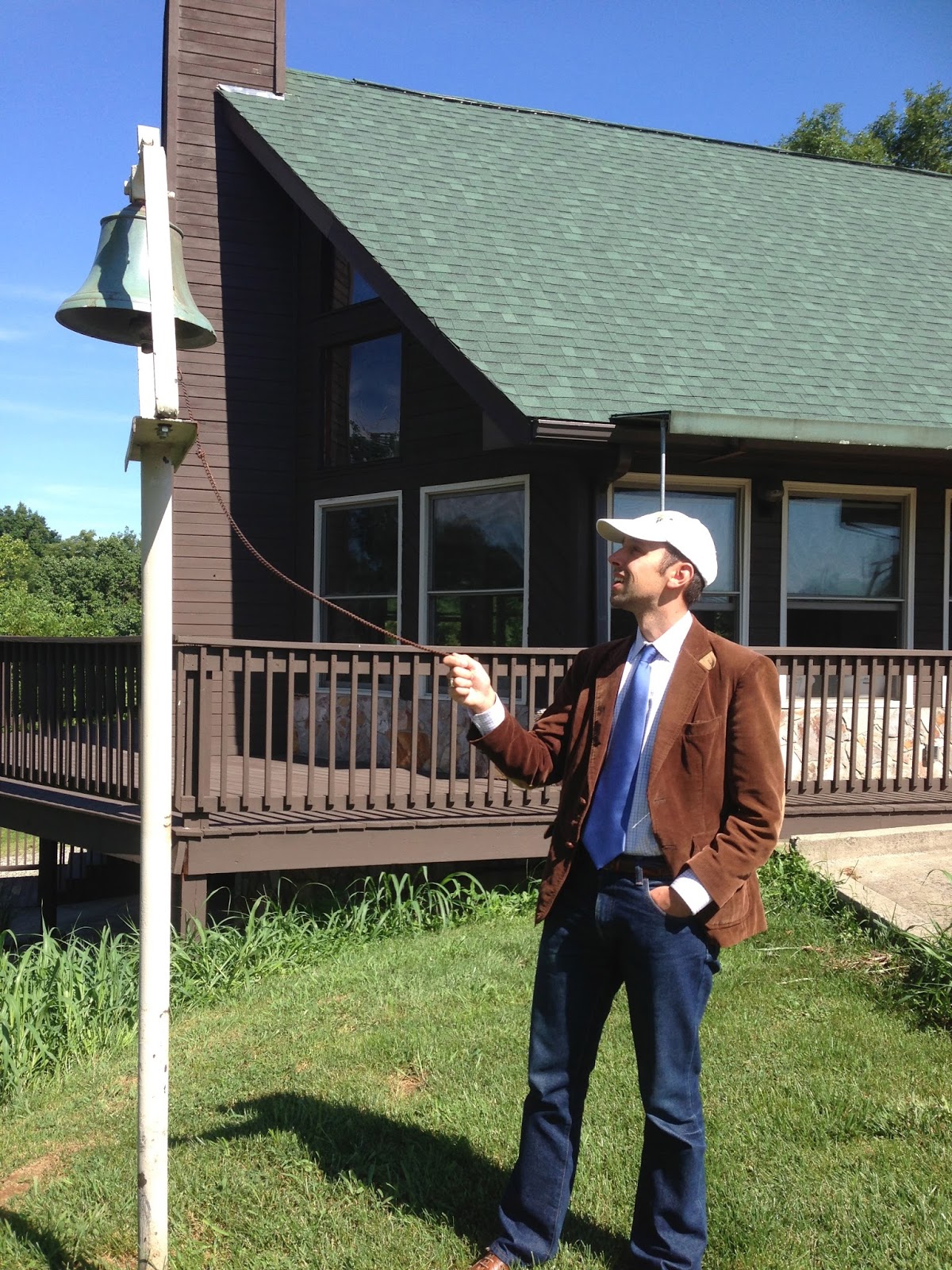 Tonight at 7:15 PM  EST (thirteen hours behind JST), the chapel bell at St. Simeon Skete tolled 71 times, one ring for each year since the bomb was dropped. This will begin our nineteenth Annual Novena for Peace.  We invite you to join us in setting apart a special prayer time these next Nine Days (beginning tomorrow) with the intention of peace.

"All these with one accord devoted themselves to prayer with Mary, the Mother of Jesus" -Acts 1: 14

A TALE OF TWO CITIES
Nazareth where Mary gave us her peace plan:
“Do whatever He says” -Jn. 2:5
and


Hiroshima where it was ignored.

NAZARETH
Nazareth is where our Lord spent his hidden life, where “nothing” was coming forth but tables and chairs, where He lived as we must live, where the Son of God was simply the son of Mary and Joseph. The hiddeness and ordinariness of Nazareth is an icon to something beyond self. It is the accepting that people may say of us what others said of Him, “Can anything good come out of Nazareth?” (Jn.1:46), i.e. can anything good come out of this life of “ordinariness” and “hiddeness”, strategically placed in areas of need, making a difference by entering into the moment? Praying this Rosary Novena for Peace is our answer “for he is our peace, who hath made both one, and hath broken down the middle wall of partition between us” (Eph. 2:14); it is our answer because He said “Peace I leave with you, my peace I give unto you: not as the world giveth, give I unto you. Let not your heart be troubled, neither let it be afraid” (Jn.14:27); it is our an- swer because we’re sent forth with peace, “Peace be unto you: as my Father hath sent me, even so send I you” (Jn. 20:21).

The Peace Plan for the World is Jesus, who gave us The Commandment (Mk. 12:28-31) to have a right relationship with God and Man. We can realize the Commandment when we follow Mary’s instruction relative to her Son, “Do whatever he says” (Jn.2:5). When we take up the Rosary, we are praying the life of Christ with a determination to do what he says in the Nazareth of our lives, Jesus.

HIROSHIMA
The atomic bomb named "Little Boy" was dropped on Hiroshima by the Enola Gay, a Boeing B-29 bomber at 8:15 in the morning of August 6, 1945. Immediately after the atomic bomb was dropped 70,000 Japanese were instantly killed.

As we experience this Rosary Novena for peace remember not only the destruction of that morning in 1945 but also the bombs that continue to drop. Bombs... bombs of intolerance, hatred, pride, unforgiveness, greed and selfishness. These destructions dropped by the planes of commerce, enforcement, body politics and religion where there is no longer any room for He who said, "What you've done unto the least of these my brethren you've done unto me." Mt. 25:40

May this Rosary Novena for Peace do what theology cannot: put a human face on suffering and redemption. May we find sacred space in two “conflicting” yet complementary Biblical quota- tions:

Both thoughts can serve as a response to the two cities: those who mourn will be comforted, and all has happened as part of God’s perfect will and permissive will.

May you take up the Rosary once more, as I have asked many times in the past, and pray it in an In- carnational manner for the "little ones" and for peace in our world.


May priests and religious chart programs of infiltrating areas of greatest need, "broadcasting" and bearing the Mysteries to the ends of the earth (Acts 1 :8). May they introduce and re-introduce this praying of the Rosary into all areas of life: families, cities, neighborhoods, offices, riding buses, walking streets ...

May we be aided in all our efforts with the grace and strength of the Lord whose life we contemplate in the Rosary, and may we be accompanied by Our Lady of the Nazareth as we continue the work of entering into all of life with the Prince of Peace. (Isaiah 9:6). 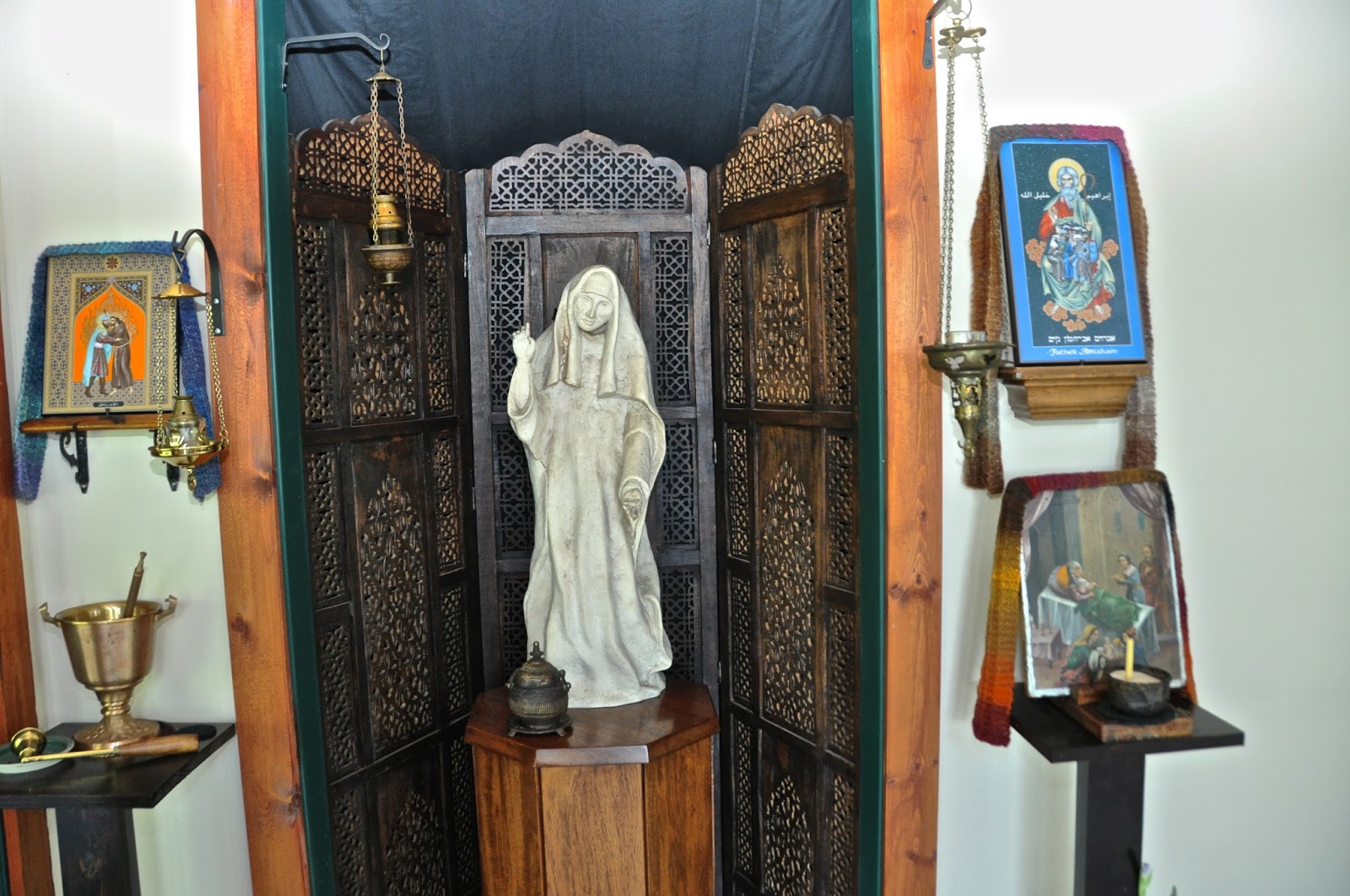 ENCOURAGEMENTS
1. Relative to the orientation message and the deaths of Hiroshima, instead of asking why, try to focus on the kind of theology needed to explain these events.
2. Meditate on the following Scriptures: Mt. 25:31-46; Heb. 13:3; John 1:14
3. Vicki Hicks on a trip to Africa organized a team to bear witness of the slaughter of 280 young people who were caught after curfew. She went with her Rosary and prayed on the sight of the tragedy with what she called instead of "air drops", "prayer drops." Find a place of great need, go, take your Rosary, and pray. Such places could be among the rich poor, ie. banking, insurance, judicial, law offices, etc.
4. If you cannot come to the skete to pray your Novena before the Shrine for Peace, print out the photo below, so you can be in solidarity with those who can be present at the 5:00 PM Vespers and Rosary. Create a sacred space, enthrone your picture, kneel, say your Rosary. This can be done at home or places as suggested above.

Remember dear ones, sacrifice, penance and prayer.
My love-
Being absorbed Into His Mercy,   - Seraphim+ 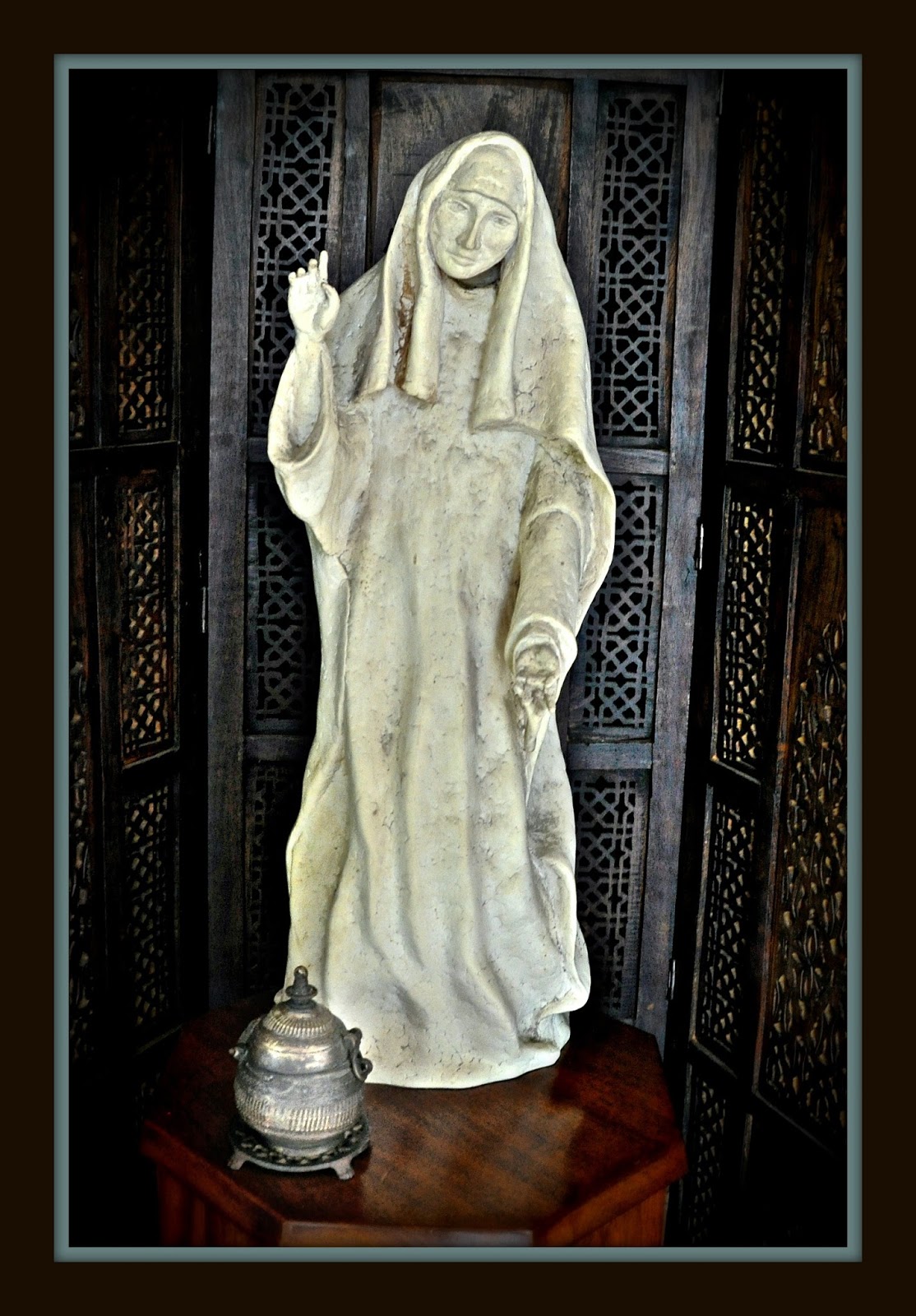 The second focus, to the left of Mary, Messenger of Peace, is an urn which contains Trinitite, representing Hiroshima. Trinitite is the surface of the earth that was instantaneously melted by the heat of the first atomic bomb test blast. Shortly before dawn on July 16, 1945, at 5:29:45 AM Mountain War Time, the atomic age was born. After years of experimentation and preparation, the plutonium bomb, nicknamed "the Gadget," was placed on top of a one-hundred foot tower at a site termed "Trinity" by the scientists of the "Manhattan Project." Inside, about twelve pounds of plutonium was imploded to start the fusion reaction which resulted in a blast equal to twenty thousand tons of TNT. The fireball was almost as bright as twenty suns. It is this melted earth from the first atomic bomb blast that is housed in the urn of the shrine.

“Lord Jesus, we thank you for giving us Mary, Messenger of Peace, to be our Mother. Great warmth fills our hearts as we take refuge in the tenderness of your Mother’s gaze; Grant that we might receive her message of peace by realizing what we have and who we are is enough, as we pray and live Your Way, Name and Life in union with Mary, Messenger of Peace.” Amen.

God, aware of my own brokenness,
I ask the gift of courage to identify how


and where I am in need of conversation


in order to live in solidarity with all people.

Deliver me from the violence of superiority and disdain.
Grant me the desire, and the humility,
to listen with special care to those whose experiences
and attitudes are different from my own.

Deliver me from the violence of greed and privilege.
Grant me the desire, and the will, to live simply
so others may have their just share of Earth’s resources.

Deliver me from the silence that gives consent
to abuse, war and evil.
Grant me the desire, and the courage, to risk speaking
and acting for the common good.

Deliver me from the violence of irreverence, exploitation and control.
Grant me the desire, and the strength,
to act responsibly within the cycle of creation.

God of love, mercy and justice,
acknowledging my complicity in those attitudes,

action and words which perpetuate violence,
I beg the grace of a non-violent heart. Amen.

Start your Rosary Novena for Peace on the 6th day of August. Say the Chaplet of the day, according to the day of the week. For instance, If the 6th of August falls on a Saturday you begin the Novena with the Joyful Mysteries.  This year we begin on a Saturday.