Last year when James visited St. Simeon Skete in Taylorsville, Kentucky he was presented with a large sign for the Nazareth House Apostolate School in Kabala. 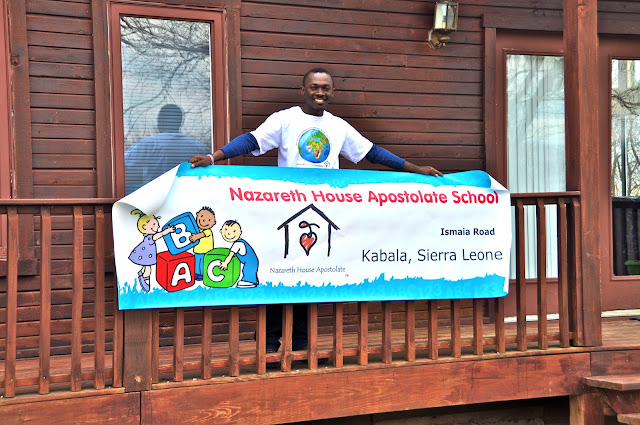 During the Summer Break the school building was painted and the sign was framed and placed prominently for all to see. 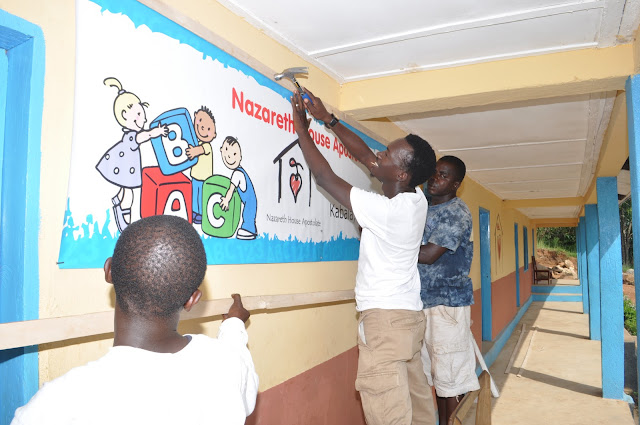 There is much to do to keep the school in Kabala and the Skete in Taylorsville  up to date, both administratively and in the way of building maintenance.  The weather presents harsh extremes on a building and we must tend to them accordingly. We count on your donations and support to do this. 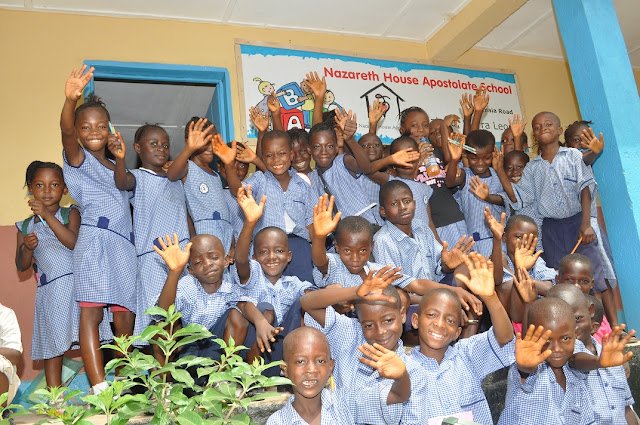 We have nearly 300 students in need of uniforms.  Unlike most schools in Sierra Leone, we provide our students with uniforms without charging their parents. 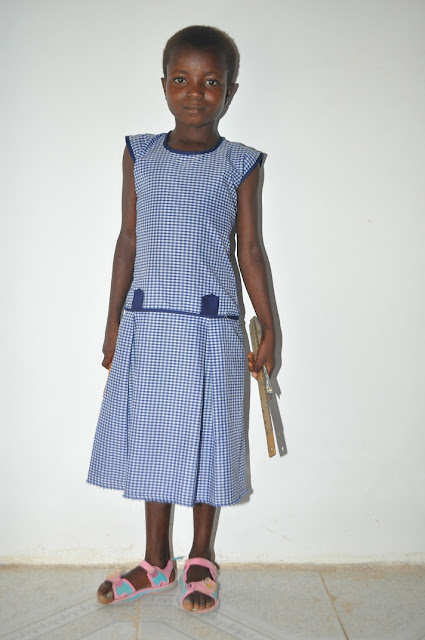 This enables parents to send their children for an education without placing a financial hardship on the family.  We do not want a child kept from school because of lack of money or clothing.   The Children pictured above on the NHA School porch represent those uniforms we've been able to afford to have made so far. 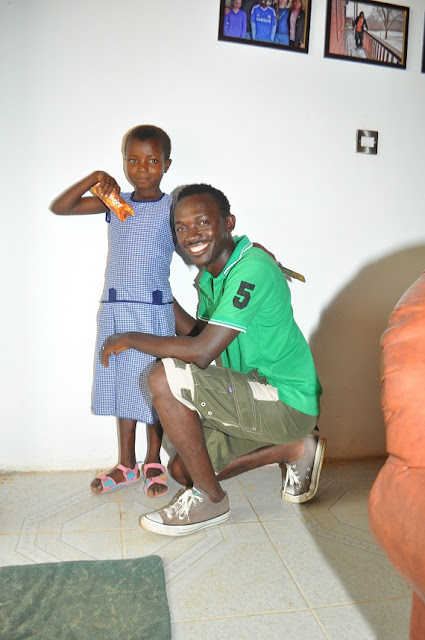 We have a long way to go to fit them all in new uniforms.  Some of the children continue to make do with the old uniforms, although most are beginning to show much wear.

It costs NHA $25 to provide two (2) uniforms per student.  For  many students this is their only complete outfit they have to wear.   If you would like to provide a set of uniforms for a student (or more) you may do so by sending your donation of $25 to NHA, 185 Captains Cove Dr, Taylorsville, KY 40071 or via the Paypal donation link on our website.  And with the Holiday Season coming up, giving a new uniform triples the gift as it enables the proprietor that sells us the material to keep his Material Shop operating (stimulating the local economy), it allows the seamstress to make some money to buy her family a meal or two with every uniform she sews and a student receives new school clothing.  What a great gift!

This year we hope that you consider Nazareth House Apostolate for your Christmas Gift giving.  For the person who has everything, rather than buying more of what they don't need, make a real difference in the life of someone in need by donating in the name of that person.  NHA will acknowledge your gift to them in a nice card along with a follow up and photo of how that gift was used.

Today is the Feast Day of St. Charles Borromeo.
(After the death of his uncle, Pius IV (1566), Borromeo contributed materially to suppressing the cabals of the conclave. Subsequently he devoted himself wholly to the reformation of his diocese. It had deteriorated in practice owing to the 80-year absence of previous archbishops.  Borromeo made numerous pastoral visits, and restored dignity to divine service.  Turning his priests and people towards deeper and deeper prayer.

In conformity with the decrees of the Council of Trent, which suggested simplifying church interiors, Borromeo cleared the cathedral of ornate tombs, rich ornaments, banners, and arms. He did not even spare the monuments of his own relatives.
He extended his reforms to the collegiate churches, monasteries and even to the Confraternities of Penitents, particularly that of St. John the Baptist. This group was to attend to prisoners and those condemned to death, to give them help and support.
Borromeo believed that abuses in the church arose from clergy ignorance. Among his most important actions, he established seminaries, colleges and communities for the education of candidates for holy orders. His emphasis on Catholic learning greatly increased the preparation of men for priesthood and benefited their congregations.
In addition, Borromeo founded the fraternity of Oblates of St. Ambrose, a society of secular men who did not take orders, but devoted themselves to the church and followed a discipline of monastic prayers and study. They provided assistance to parishes where ordered by the church.
n 1576, when Milan suffered an epidemic of the bubonic plague, Borromeo led efforts to accommodate the sick and bury the dead. He avoided no danger and spared no expense. He visited all the parishes where the contagion raged, distributing money, providing accommodation for the sick, and punishing those, especially the clergy, who were remiss in discharging their duties.
Borromeo met with much opposition to his reforms. The governor of the province, and many of the senators, addressed complaints to the courts of Rome and Madrid. They were apprehensive that the cardinal's ordinances would encroach upon the civil jurisdiction.
Borromeo also faced staunch opposition of several religious orders, particularly that of the Humiliati (Brothers of Humility). Some members of that society formed a conspiracy against his life, and a shot was fired at him in the archiepiscopal chapel. His survival was considered miraculous. (Brothers of Humility tried to have him murdered - how humble of them...wow)
He successfully attacked his Jesuit confessor, Giovanni Battista Ribera who, with other members of the college of Milan, was found to be guilty of unnatural offenses. This action increased Borromeo's enemies within the church.
Borromeo's manifold labors and austerities appear to have shortened his life. He was seized with an intermittent fever, and died at Milan on 3 November 1584. He was canonized in 1610, and his feast is celebrated on 4 November each year in the Roman Catholic Rite.)
Posted by Vicki at 9:16 AM